I love social media!  I used to think that I didn't love it because it was so new and time consuming and I couldn't make sense of it:)  But after some research and many interviews with people who are using it I find that I love it.  One of the things I love is discussion forums.  I found many relevant discussion forums on Linked-In and the one I have been dabbling in most recently is "Children's Books".  On "Children's Book" discussion forum I heard about "Illustration Friday"  a great website for creative people like me and I bet you too!    In their own words...."Illustration Friday is a weekly drawing challenge and participatory art exhibit brought to you by Illustration Age. Every Friday a new topic is posted (based on topics you suggest!) and you have one week to come up with your own, unique interpretation.  Anyone who likes to draw, paint, sculpt, doodle or color can participate in Illustration Friday."  When I saw this description I knew it was for me!  Here is a link to their site.... Illustration Friday   This gives me a great way to practice and doodle with illustrations without the pressure of an assignment or client to please:)  This first week is

Onomatopoeia is when a word’s pronunciation imitates its sound.

So here is my first submission.  It's a piece that I did about a year ago but I thought it fit for this assignment and would get me started!  I'm counting on you to keep me honest and posting weekly:) 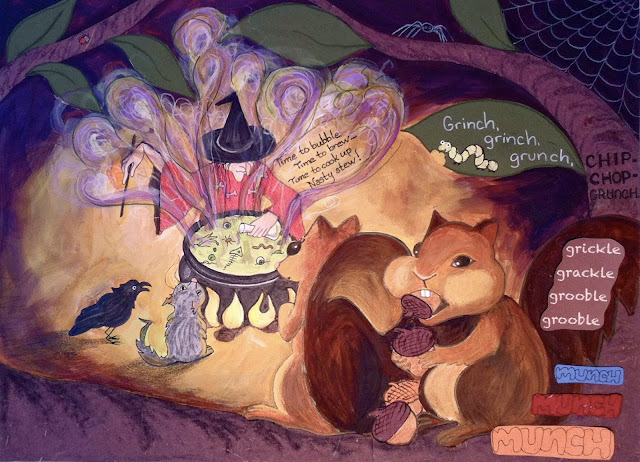 Posted by Heather Lynn Harris at 12:54 PM No comments:

This semester I am stretching myself and focusing on development of memorable characters.  This is not an area that I have a lot of experience in, but one I want to get better at, especially since I would like to do children's picture book illustration!  I am taking a class this semester at AAU with an instructor whose work I love!  We have only had two weeks of class but we are already developing full characters.  I am really trying to think about making the characters I draw memorable, lively and relatable to my readers.  This week we were asked to create a character with different "costumes".  I interpreted this a little more literally and put my character in "costumes" similar to the boy in the wolf costume in Maurice Sendak's "Where the Wild Things Are".

So I chose the character Tiger Lilly from the story of Peter Pan.  She is the Native American that Captain Hook is always stealing and tying up for Peter to come rescue:)  Tiger Lilly is a spunky, spry character that I imagined would be full of ideas of how to get away.  So I drew her in her native costume and gave her a sweetness.  Then I dressed her as a pirate, thinking, since the pirates keep stealing her maybe she would dress up as a pirate to get away.  I gave her attitude as a pirate since she would need that to hang with Hook's men.  Lastly, I drew her dressed as a fortune teller where she could use her fortune telling powers to mesmerize Hook and make her escape!  Below are the drawings.  Let me know what you think! 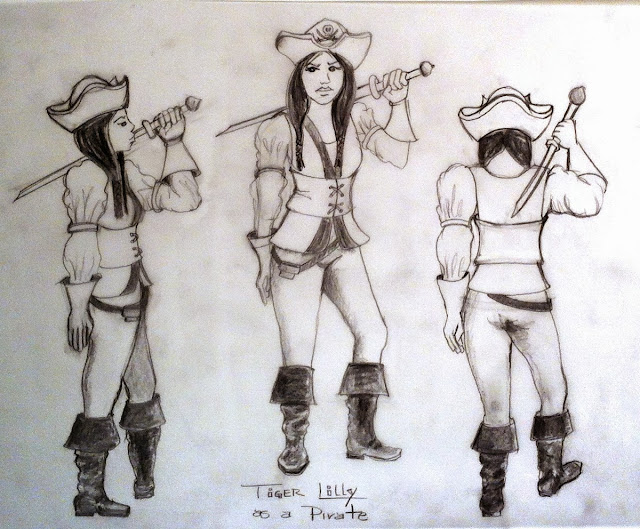 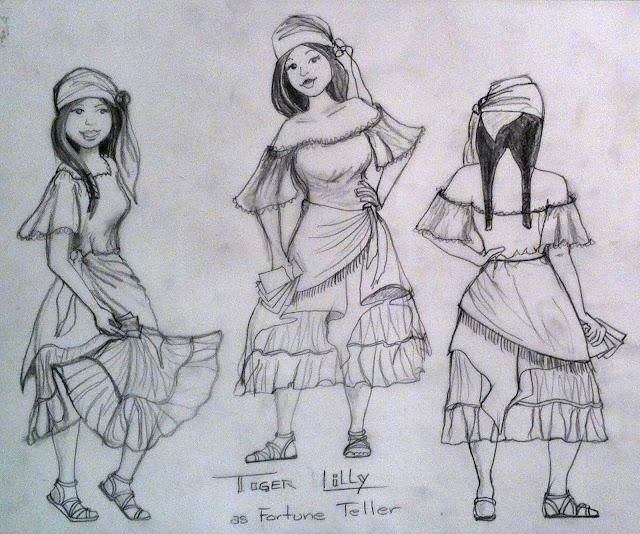 Posted by Heather Lynn Harris at 12:00 PM No comments:

So here are my two other projects that I worked on this weekend.  The first is a series of 5 clothed figures drawn from all angles.  I did these in charcoal on newsprint from photoreference that was provided to me.  I was looking to get the proportions accurate, a likeness, and consistency of character from pose to pose. 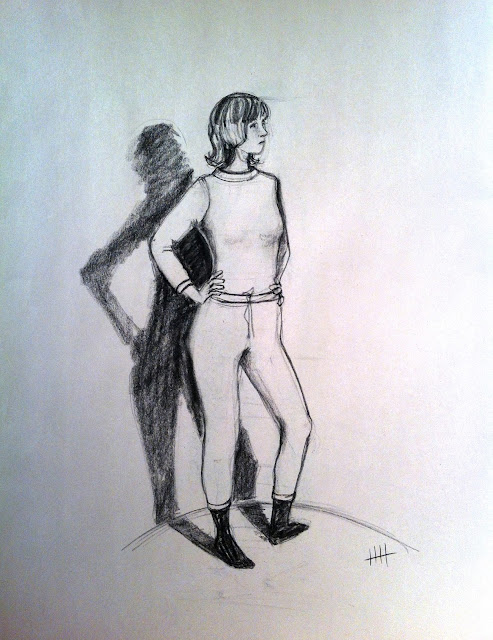 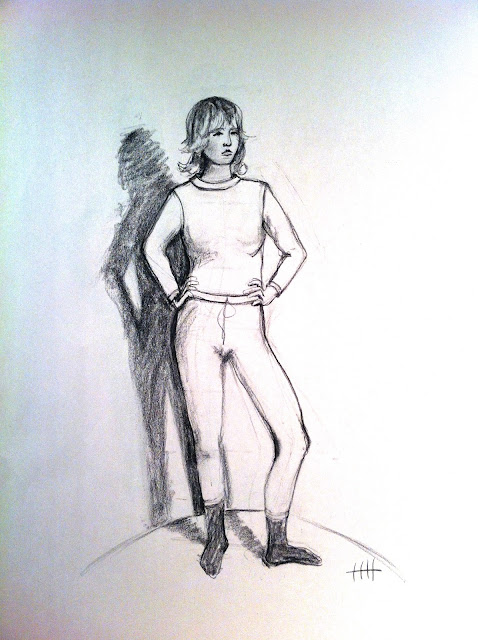 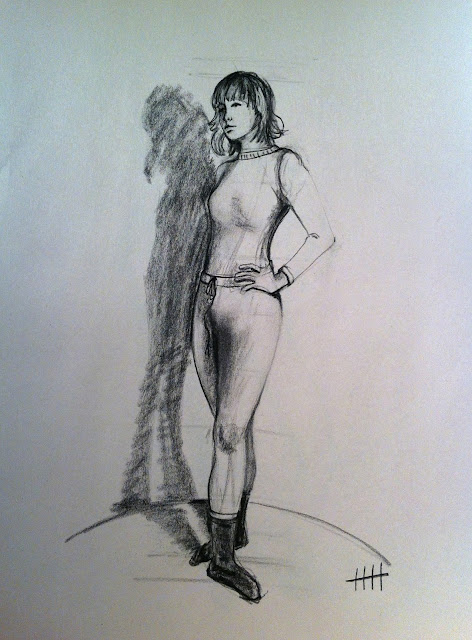 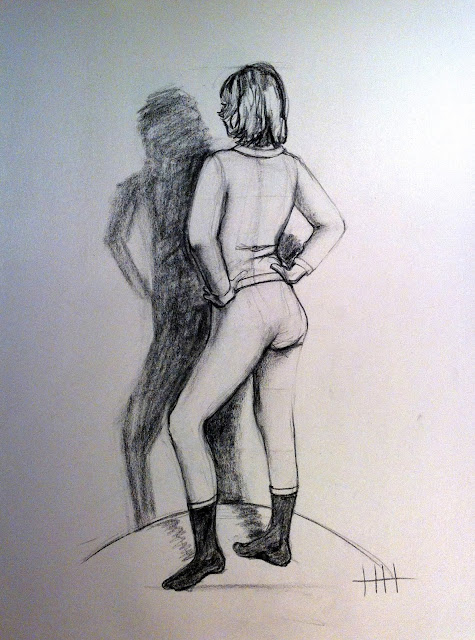 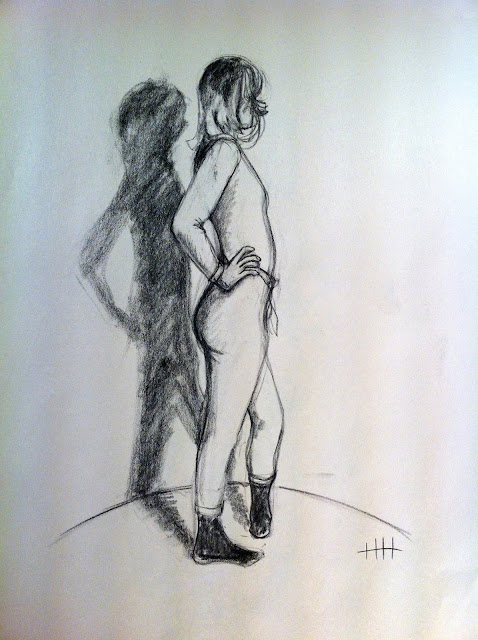 These poses were a warm up exercise for my next project which was to develop two characters, a male and female, and draw them from front, side and rear view.  The characters should be recognizable and clothed and accessorized appropriately, but we were given some flexibility in proportions to help make the character memorable.   I chose to do a Flapper girl and a Chef.  Here they are.  Enjoy 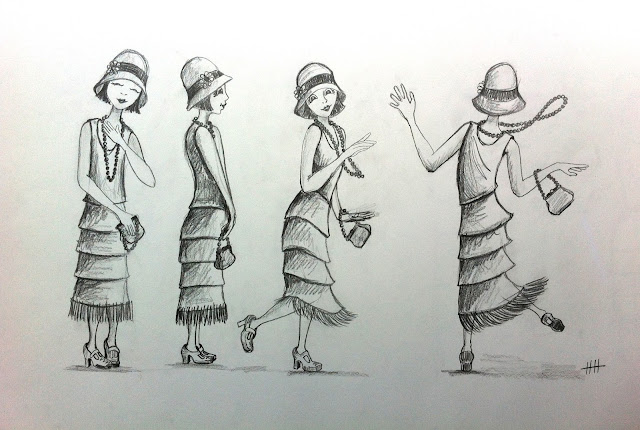 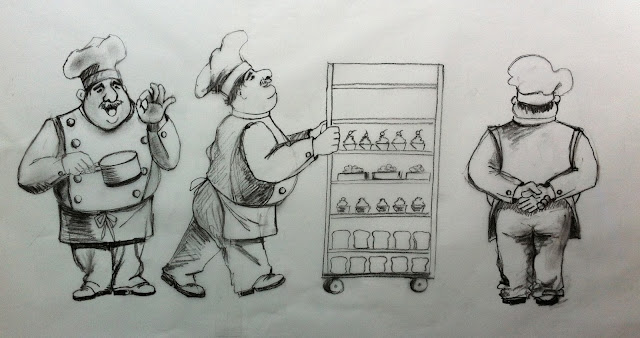 Posted by Heather Lynn Harris at 4:56 PM No comments:

A weekend of drawing!

I have been drawing all weekend working on three different projects...so I have lots of artwork to update you with:)  The first is for my thesis.  I have been studying and drawing mice for my children's book "Five Hungry Mice".  Here are my quick studies.  I need to do more but here are my first few pages. 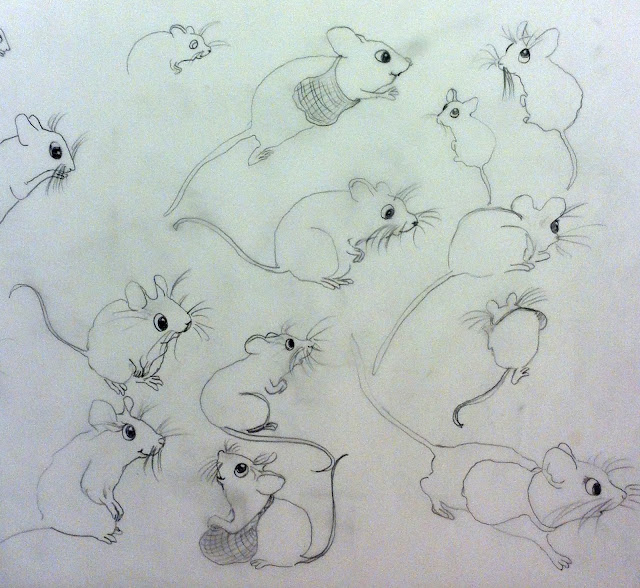 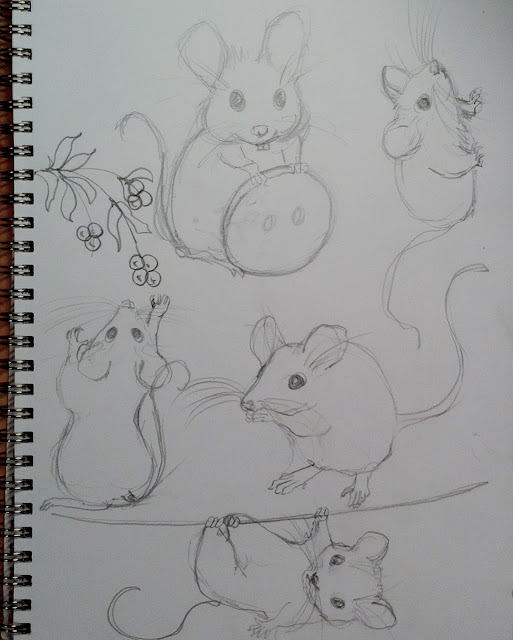 my husband interrupted me in the middle of my post for a trip to 7-11 for slurpies.  Since it was 10 pm on a Saturday night I just had to go to see who exactly is at a 7-11 at that time of night.  We took the whole family, my three kids, and my nephew who was visiting.  Guess what....we were the only people at the 7-11 at 10pm on a Saturday night!  The cashier was eyeballing us quite a bit, I think he thought we were going to steal our slurpies.  We paid in full, so here is the Slurpie I got to prove it! 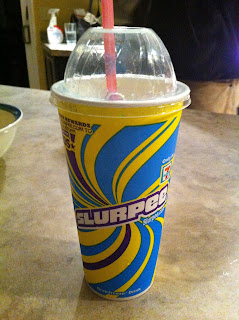 Posted by Heather Lynn Harris at 9:37 PM No comments: