A while back I told you I was working on another picture book as part of my thesis for AAU.  Well, I thought you might like an update.  In the fall I worked on the storyboard, character development and created 3 "almost" finished illustrations.  This spring I am carrying on and working on two more illustrations...maybe three if I am ambitious enough:-)  I will present all of my work from The Swing, The Fox Went Out On A Chilly Night and The 5 Hungry Mice during the summer to the Final Review Committee at AAU as part of my final assessment for my MFA.

Ok, but that's a few months from now.... for today I thought I'd take you through my process and what I have created so far for "The Fox".

First there was early character development...
These are a bunch of sketches exploring different shapes and styles of the fox.  These are not exhaustive, but give you a sense of exploration.  There is also the "old grey woman" in the story so I added her in too.  You can see a line up of the fox and the old grey woman at the bottom. 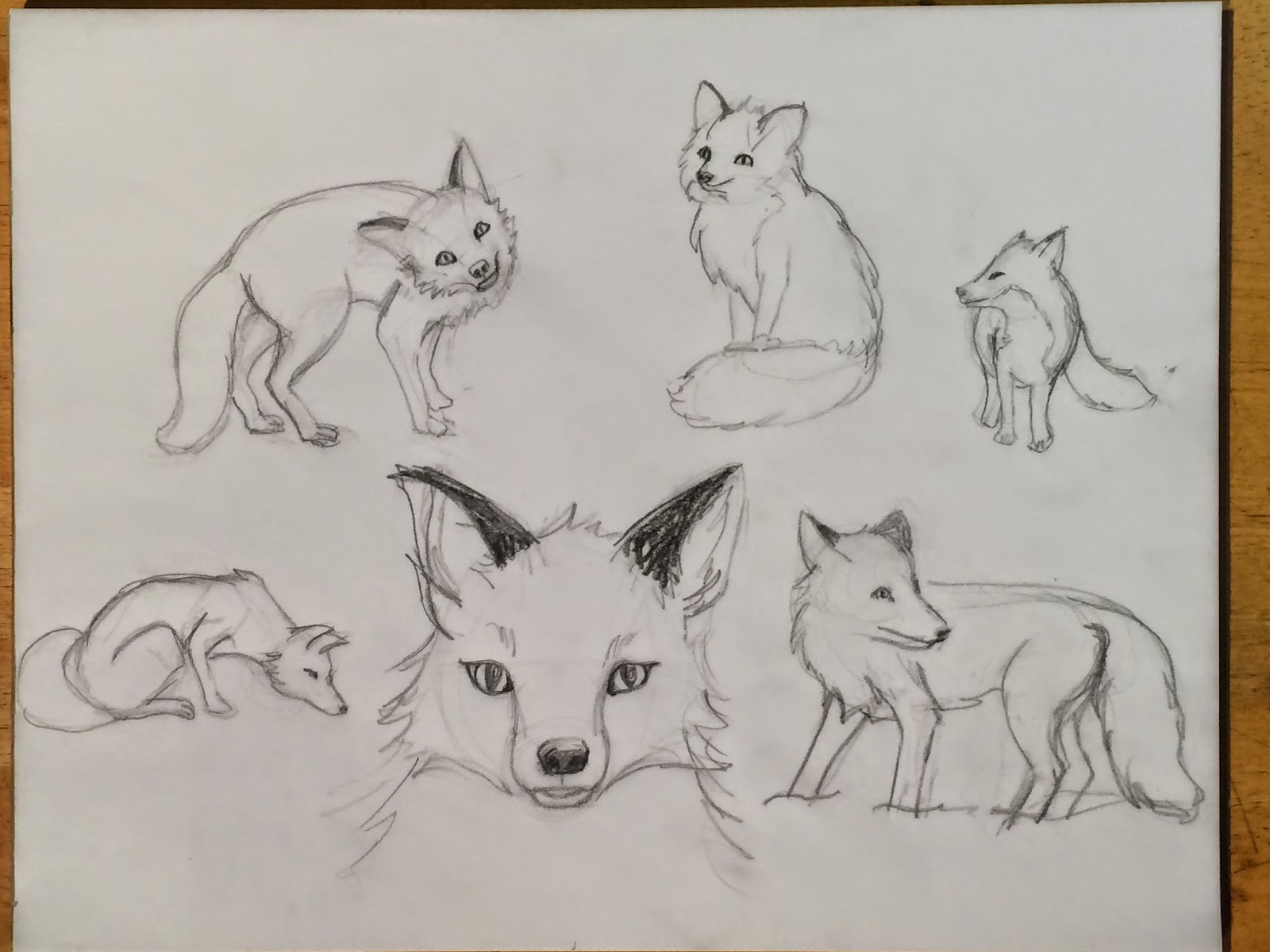 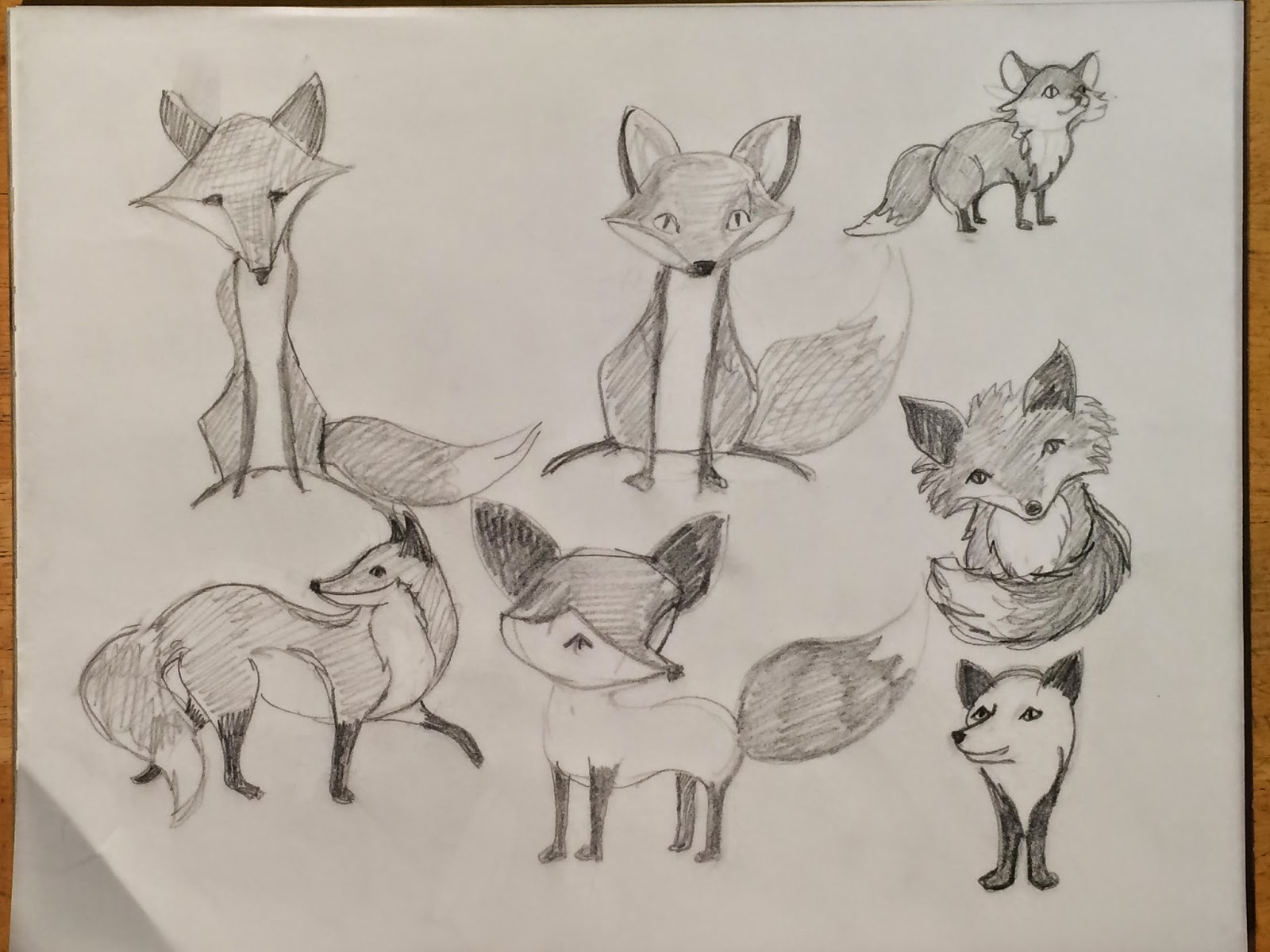 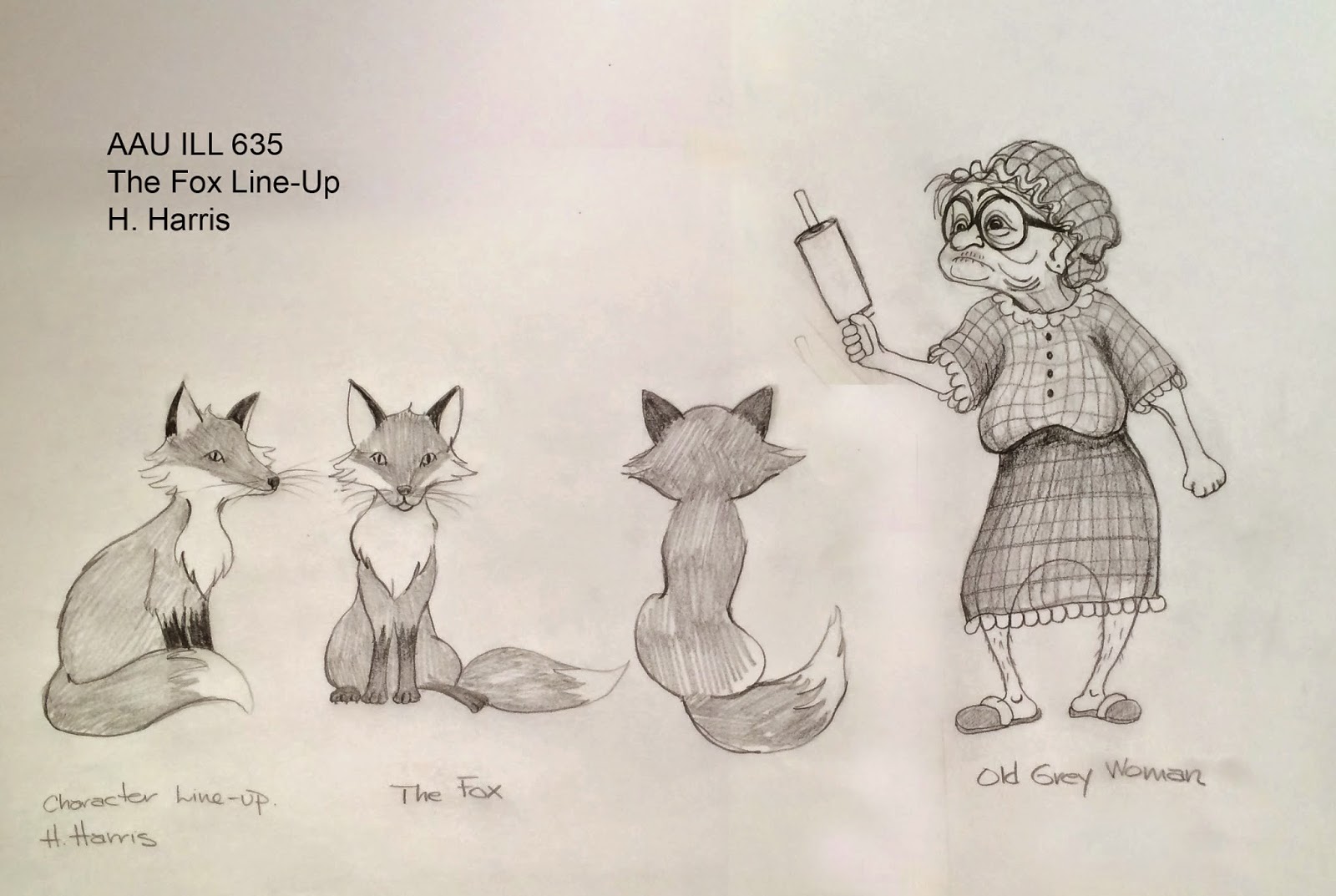 After working on character I started doing research into the environment that the fox lives in.  I decided to set the scene in rural England since the British are so famous for hunting foxes.  I thought it would make for quaint scenery that would fit nicely in a picture book and also would be fun to paint! I used the internet to assist me with this and created an "environment board".  You can see that below. 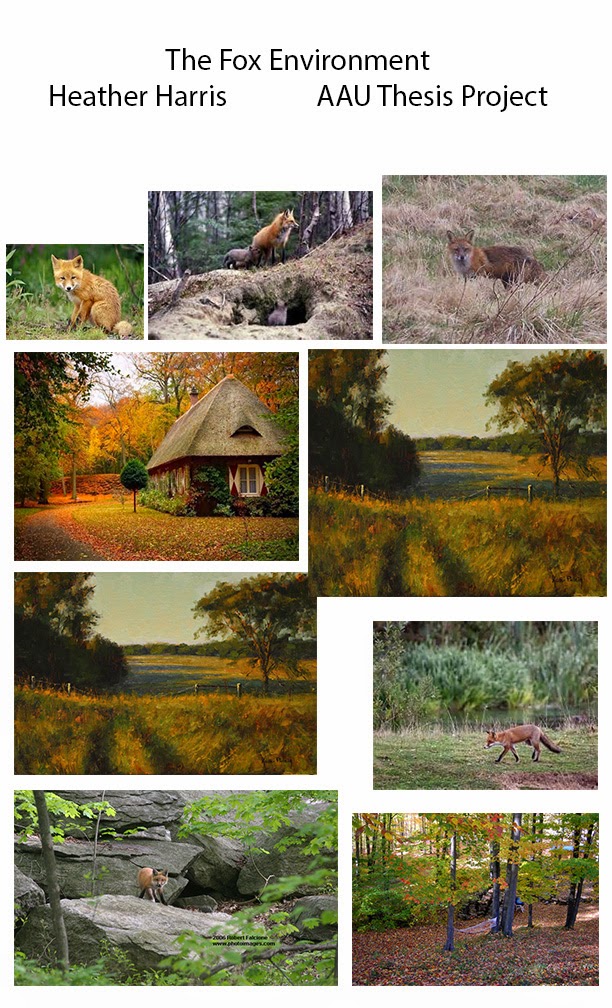 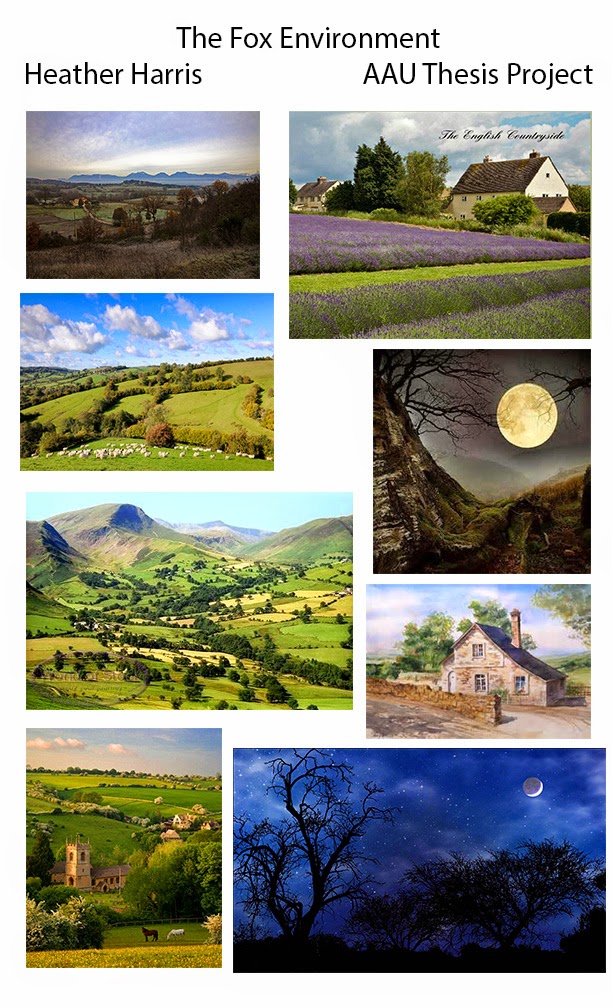 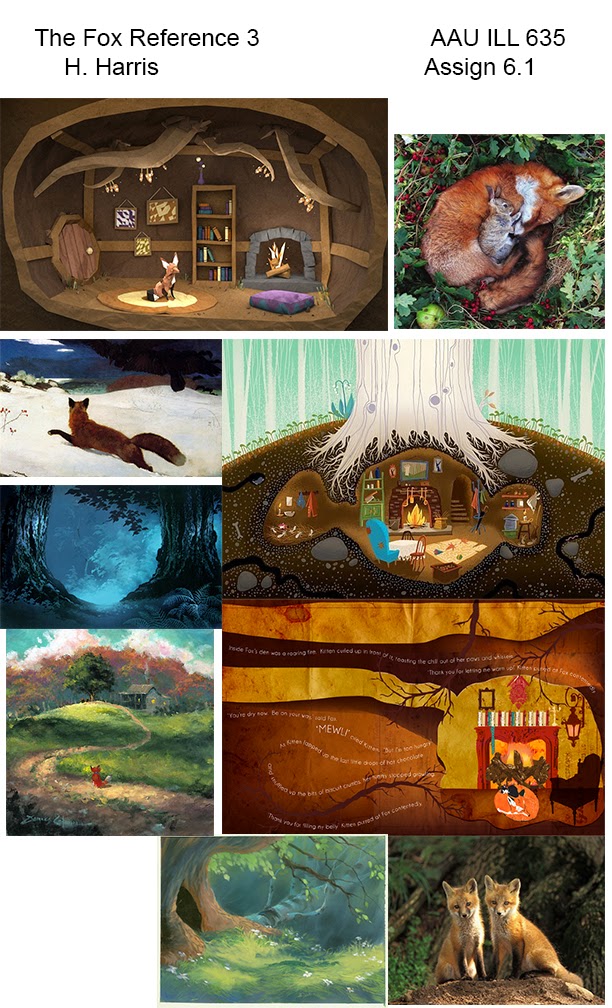 After environment I worked on the storyboard.  I envisioned this as a full 32 page picture book so I had a lot of frames to work with to create some interesting compositions.  I wanted to show the journey the fox had to make to find his supper, the excitement of the chase, and the comfort and safety of being back at his den with his family.  I created several storyboards and received some great feedback from my instructor at AAU.  Below is the storyboard as it is today, but I still see some areas for improvement, so it is by no means final. 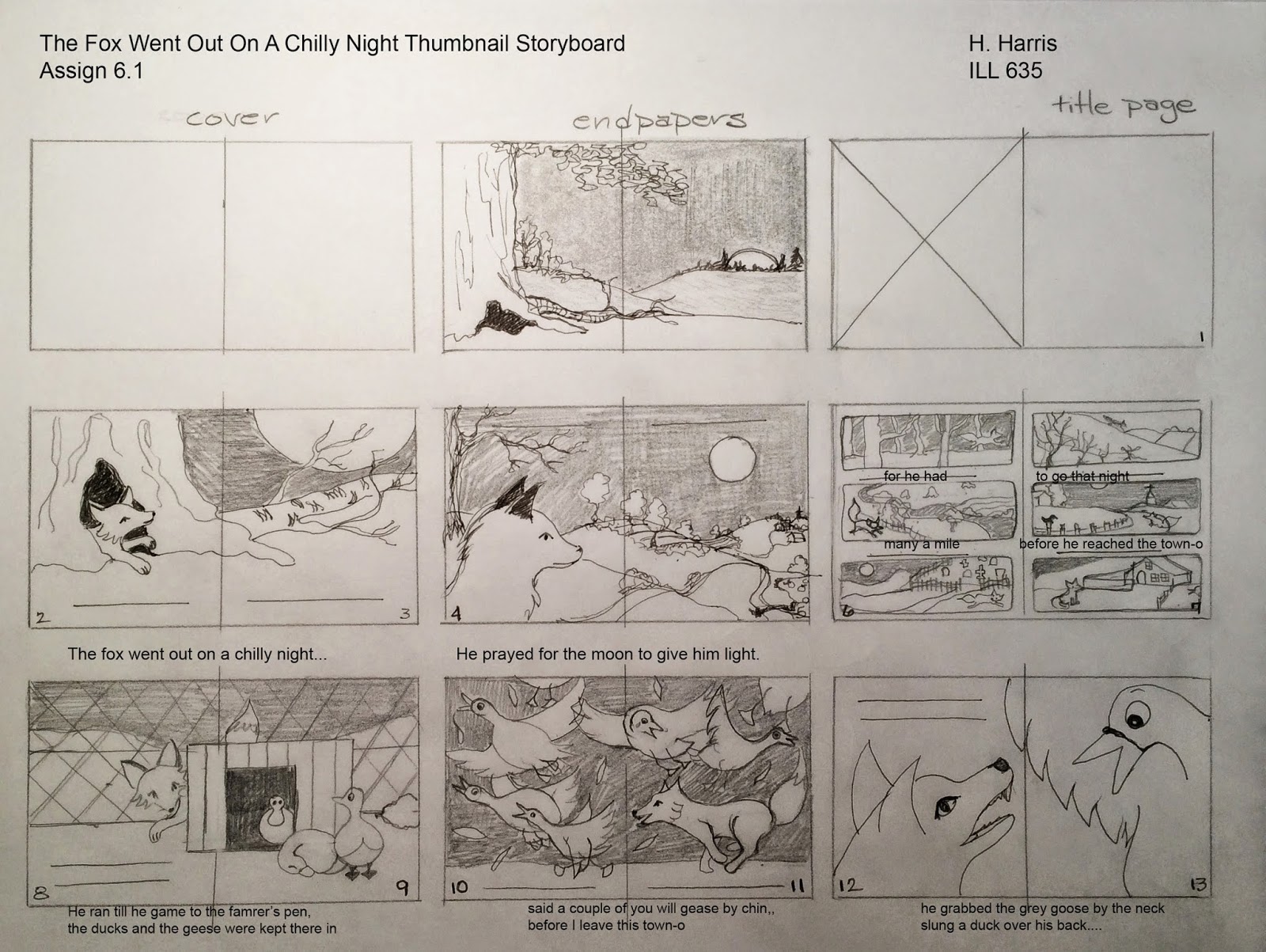 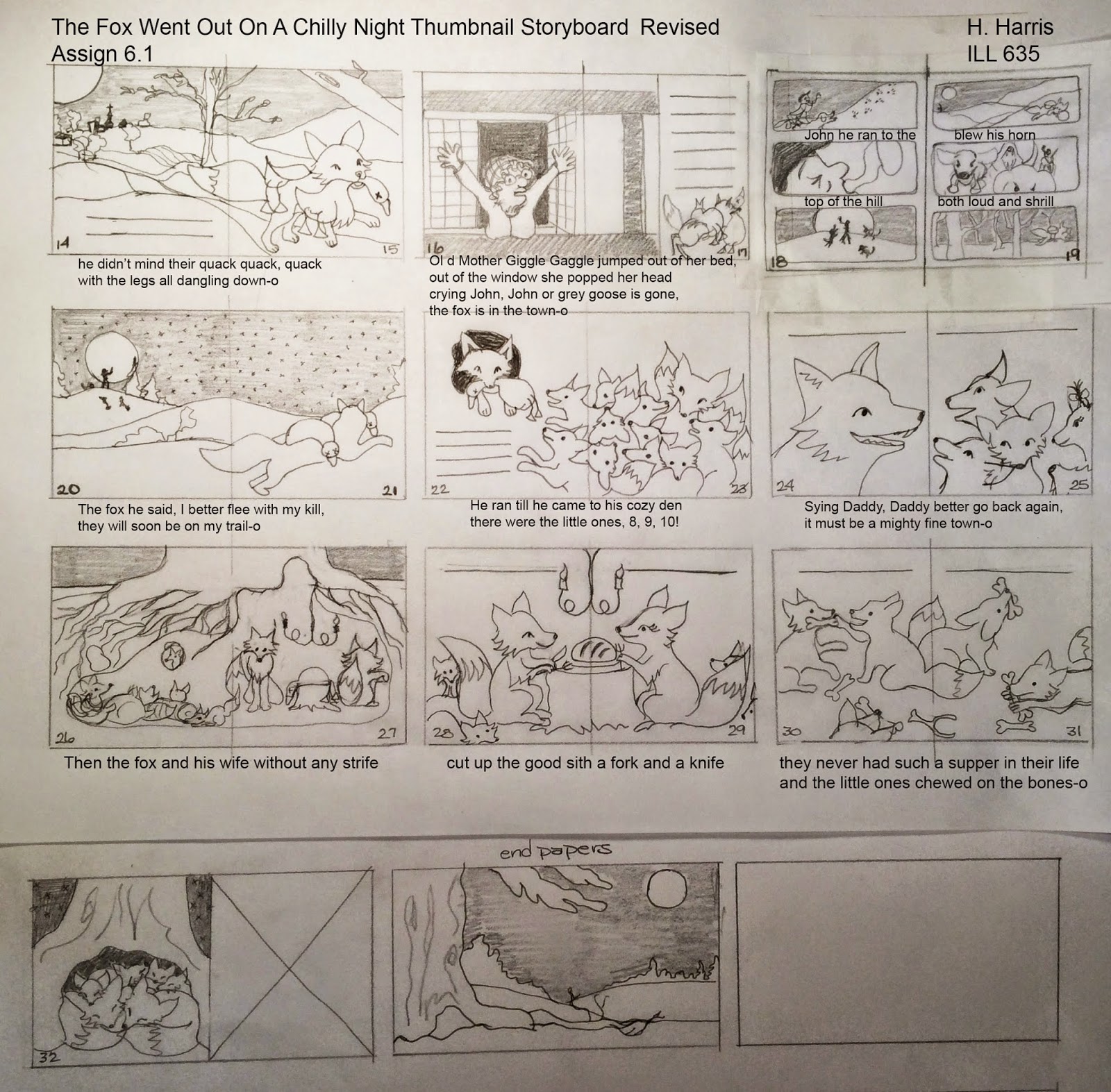 Value studies and color studies followed...
I chose three images that I wanted to take to completion for my class work...ultimately I want to take the whole book to completion:-)  Which three would you chose?  It was a tough choice.  Some compositions were working better than others and I wanted to show a range in my compositions with the three that I chose.  I didn't want to chose three that were all basically the same.  I'll skip the value studies and just jump to the color studies of the three I decided to start with....

Then came the painting....that's the fun part!  All of the upfront work helps to make the painting process go so much easier!  I have my references, my character development, my environment reference, my storyboard sketches and color studies....now it was time to enjoy the fruits of my labor and paint:-)

Below are what I am calling almost finished illustrations.  I still have a few small areas to work on and a few critiques from my instructor to address, so you will be seeing an update on these.  But to make this post complete I decided to include the finishes at the state they are right now.

So there it is!  What do you think?  Leave me a comment.  I have on my easel the next two that I am working on, so be on the look out for an update on them as well.  Hope you enjoyed:-)

Email ThisBlogThis!Share to TwitterShare to FacebookShare to Pinterest
Labels: character development, children's picture book, color studies, oil on board, painting process, storyboards, The Fox When Out On A Chilly Night


I had the coolest experience that just goes to show you why it's so important to support our local retailers.... 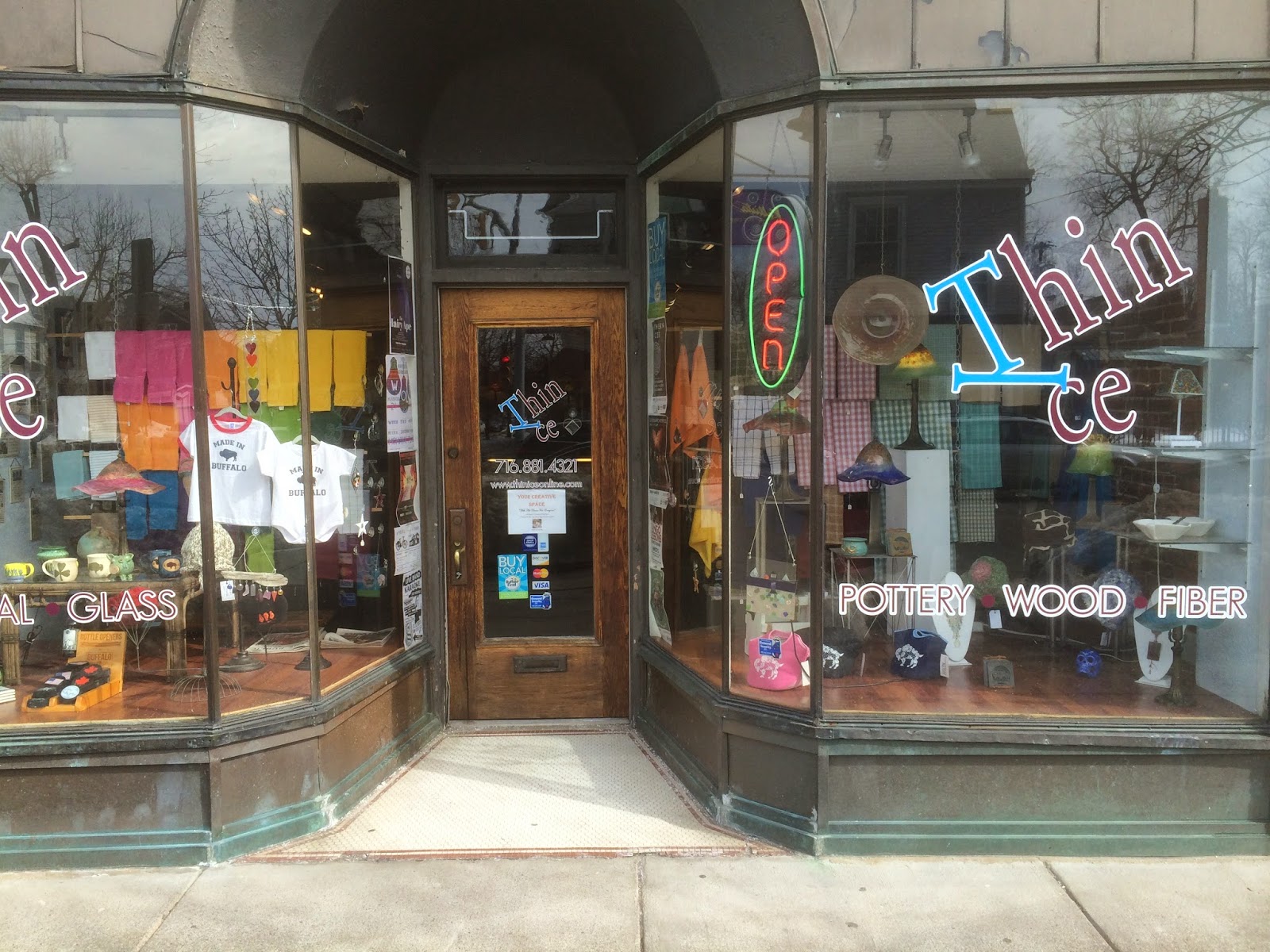 A girlfriend and I met for coffee this past Friday.  We decided to meet at Spot Coffee on Elmwood in Buffalo, NY so we could relax and do some window shopping afterwards.  As we were walking we spied this interesting looking shop.  It is called Thin Ice and it showcases a lot of local artists work.

Here is how they describe themselves....
We support the local arts community in Buffalo, NY and surrounding areas by selling predominately locally handcrafted jewelry, pottery, glass, metal, fiber and wood creations.  Everything is handmade in AMERICA.

I love that statement, and there was even a kitty sitting in the sunny window so we just had to go in! 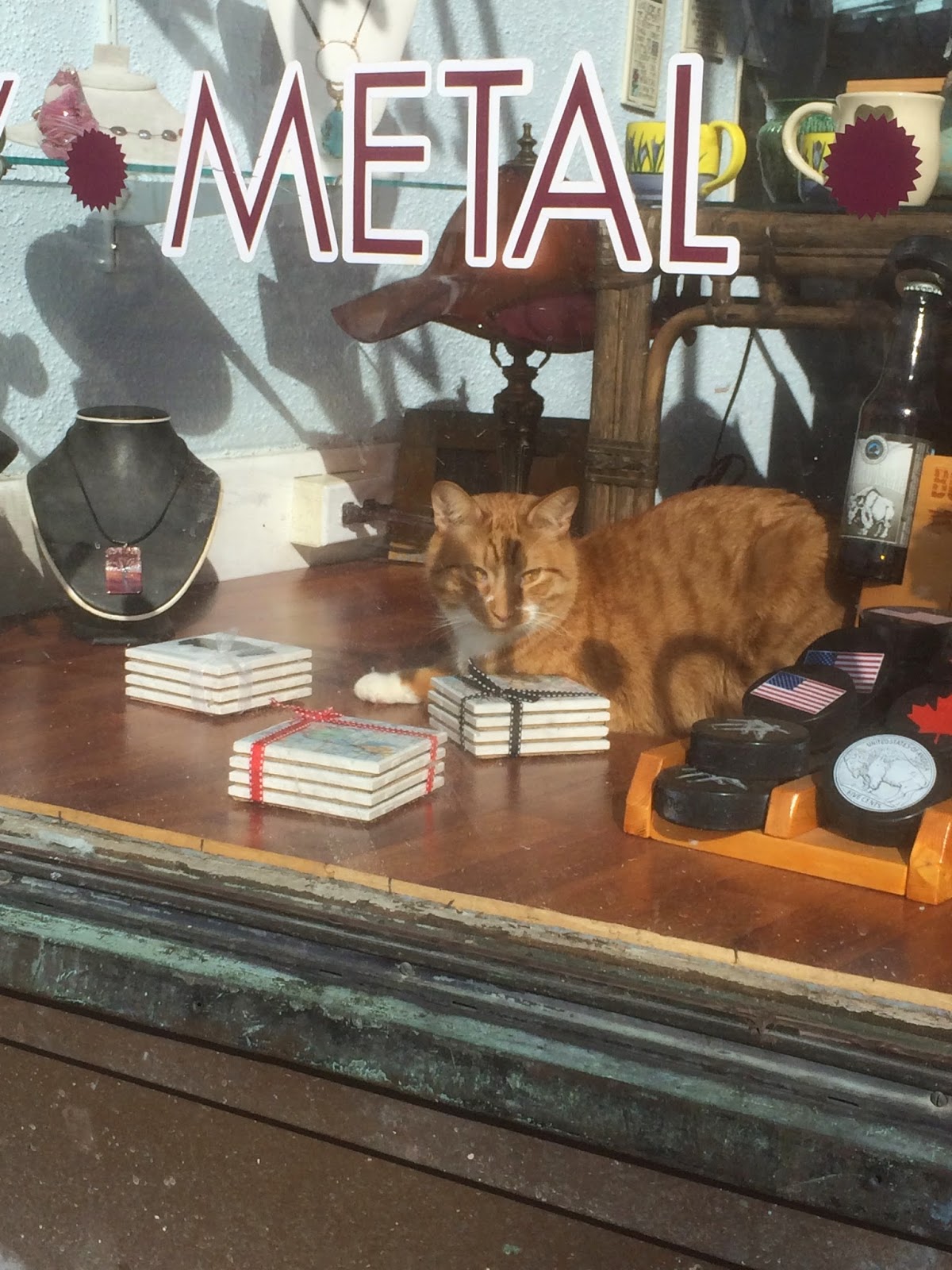 There was wonderful work and very reasonable prices for handmade one of a kind art.  They also have a little studio where they hold weekly art classes in all kinds of mediums.  I really like this store and highly recommend that you stop in and visit.  But now for the surprise...

As we were browsing we found a book section, and you know I love picture books, so I had to stop and browse....when my eyes fell upon this!  A display of books from Buffalo Heritage Unlimited including my book The Swing!  How cool is that?  I was blown away.  First of all to see my book in a store was so cool, but then to think that the owner of Thin Ice supported me as an artist.  It was humbling and wonderful at the same time. 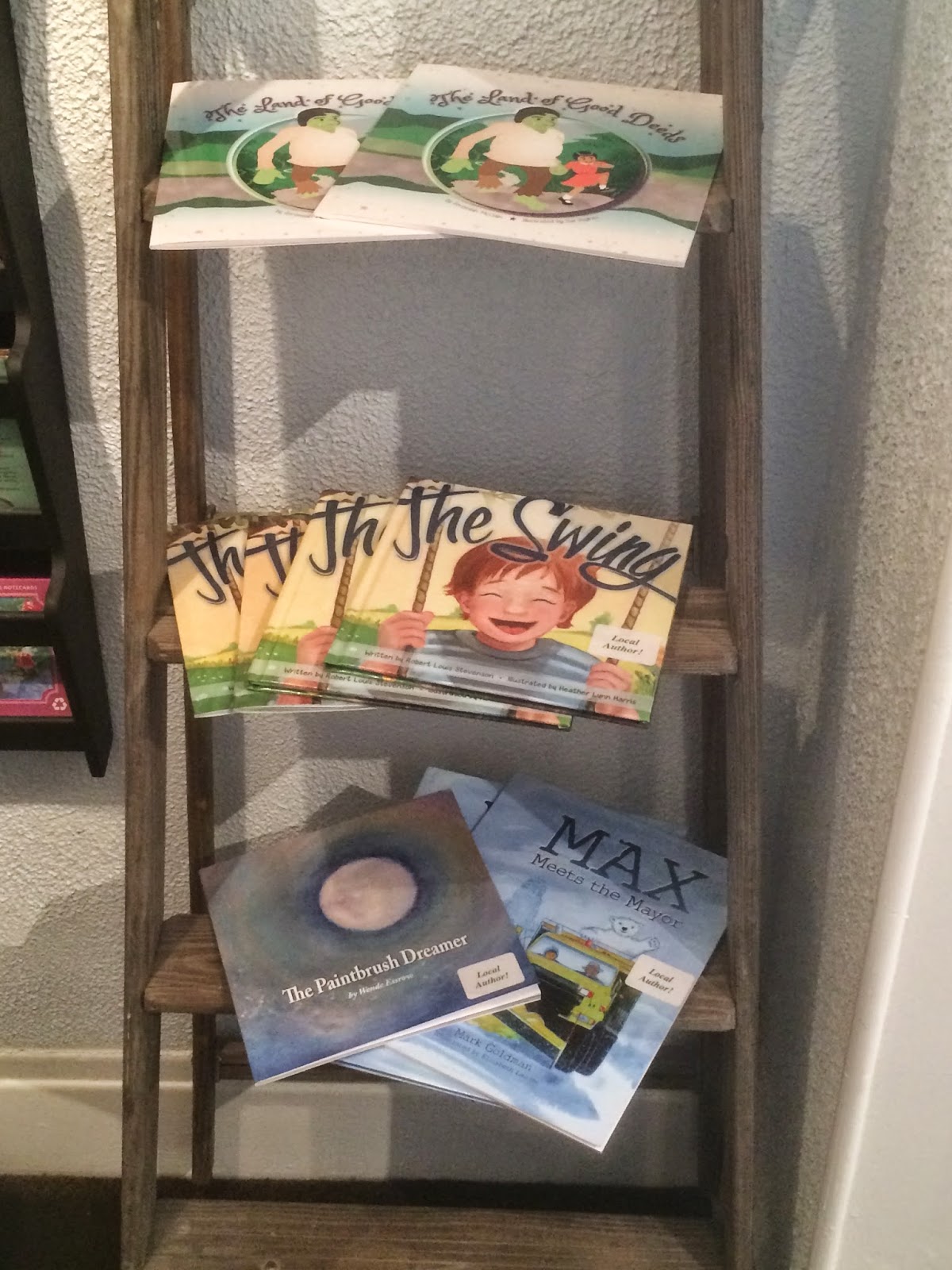 So if you want to support your local retailers and local artists please shop Thin Ice and stores like it!  They are a real gem in our community:)

Thank you Thin Ice for your support of me!  :-)

Posted by Heather Lynn Harris at 10:31 AM No comments:

Paper and scissors and glue, oh my!

What might be going on here?  Experimenting with collage....Stay tuned to see the final work! 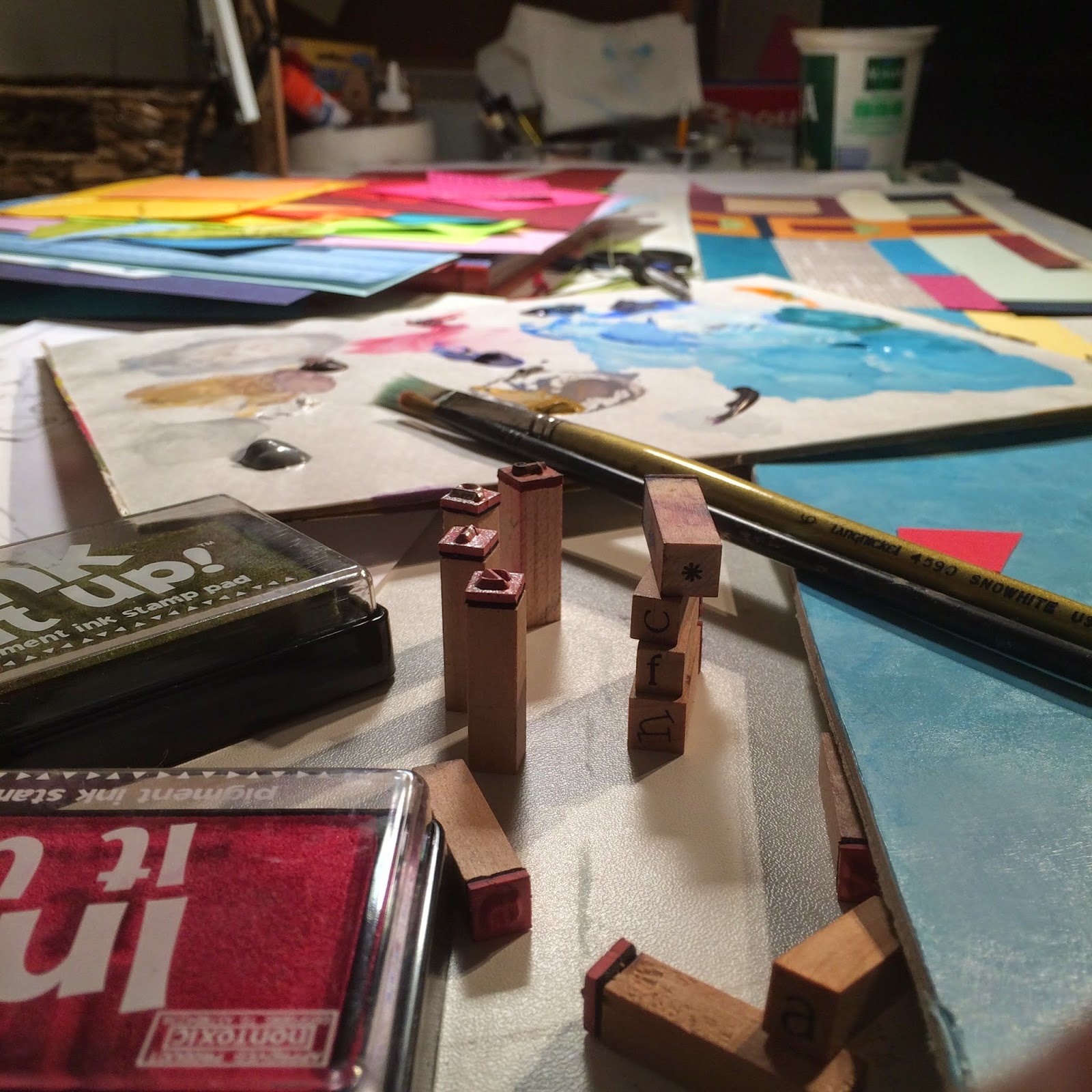 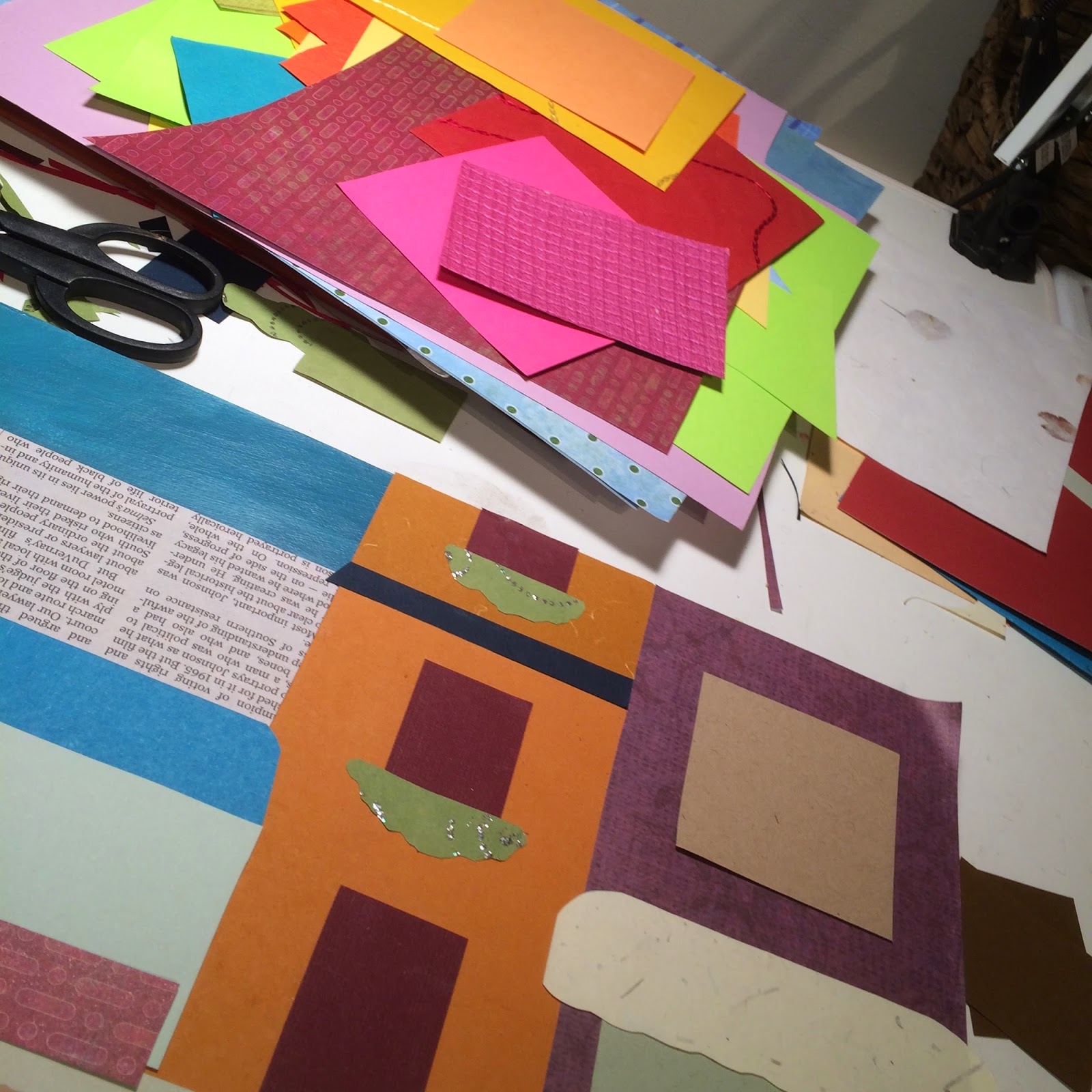 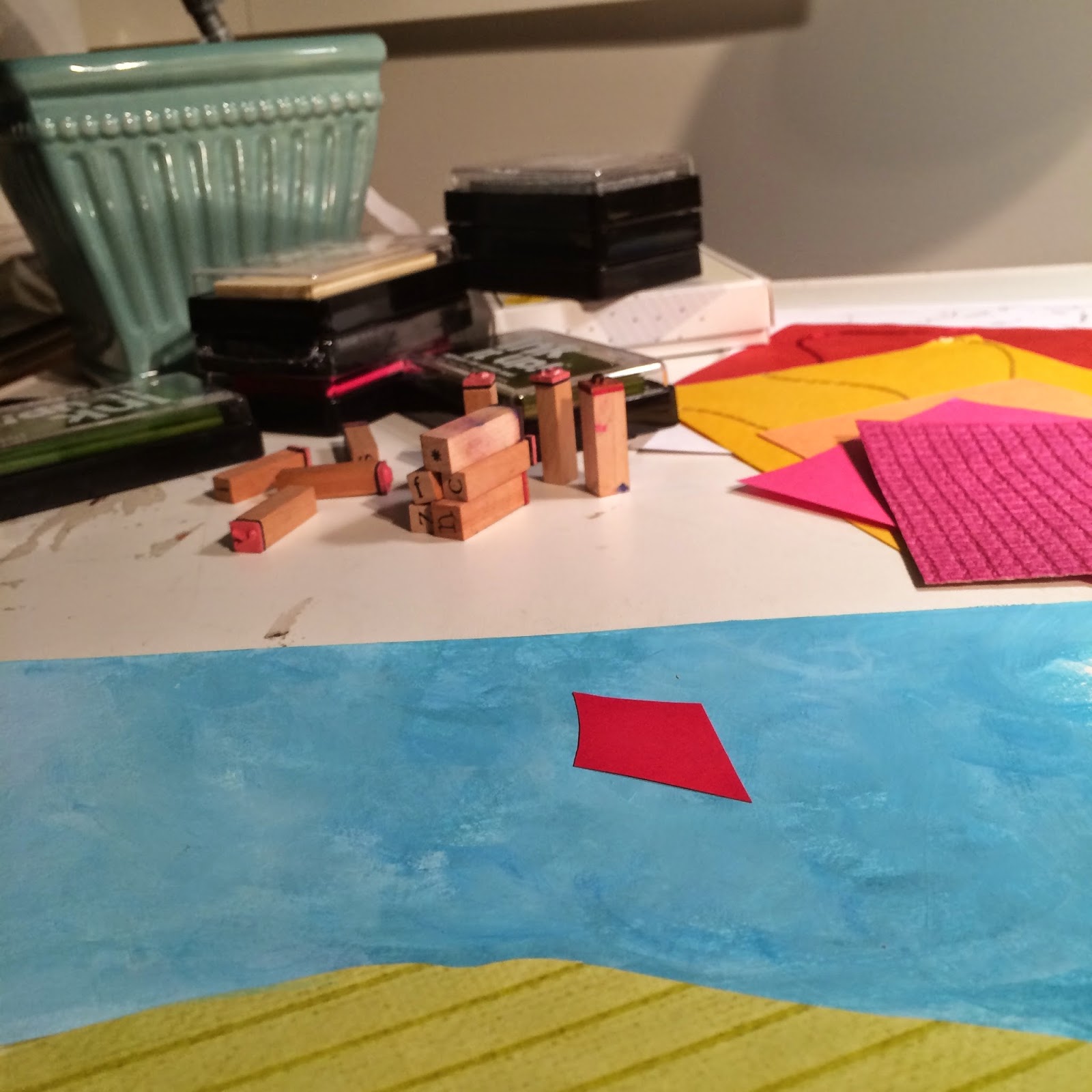 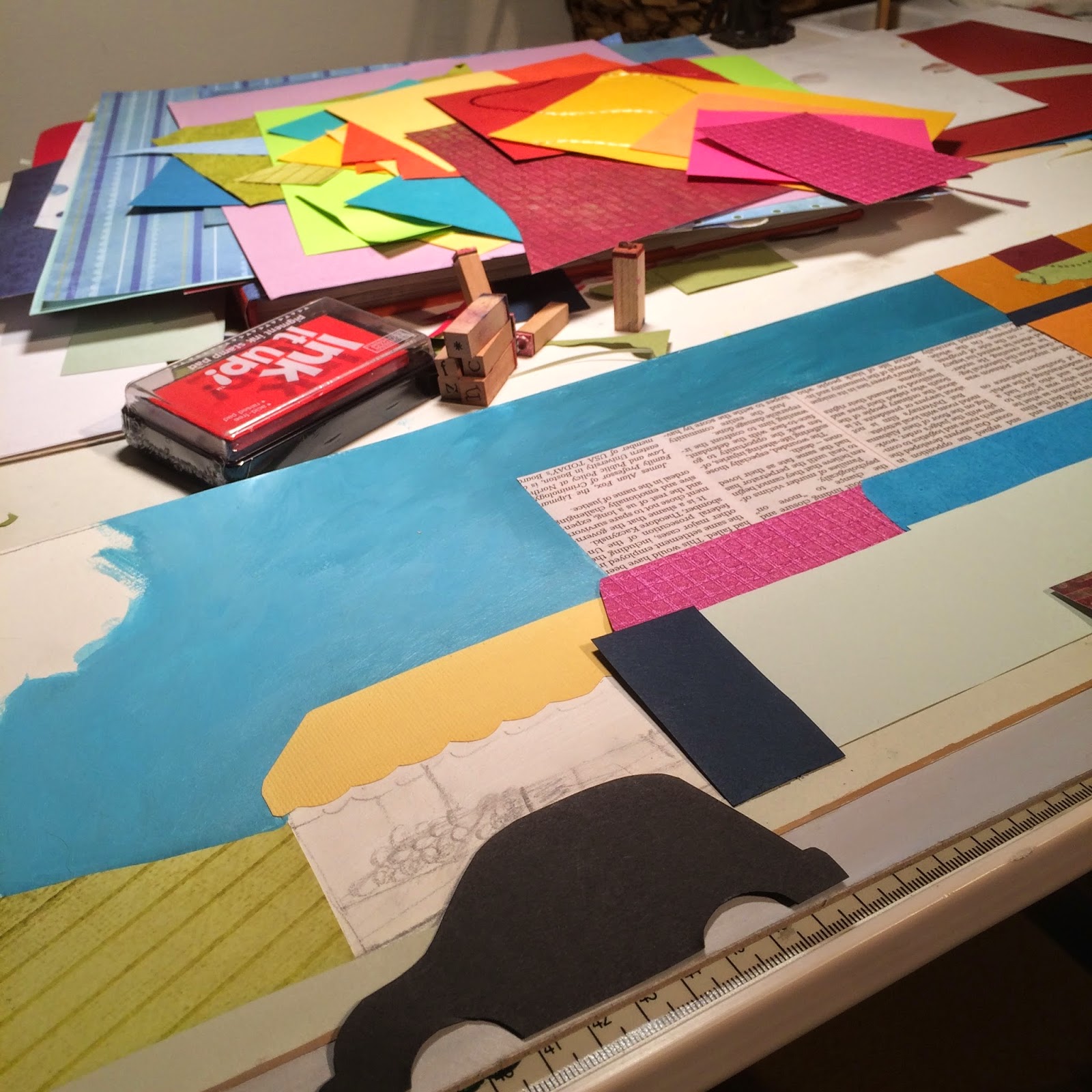 Doodles from a plane....

Sorry for the long delay in posting.  This winter has been rough and while I have been busy and productive, I have not had much time to post:-)  About two weeks ago I went to Las Vegas with a group of fashion students from the college where I teach to attend The MAGIC show.  It's the world's largest fashion show and it was incredible! Tons of inspiration in the fabrics, colors, trends, and displays.  The fashion girls were in heaven and loved every minute of it.  We were so busy, that despite me brining my sketch book, I never really got a chance to do any sketching till the plane ride home.  So here are a few doodles that reveal the success of our trip:-) 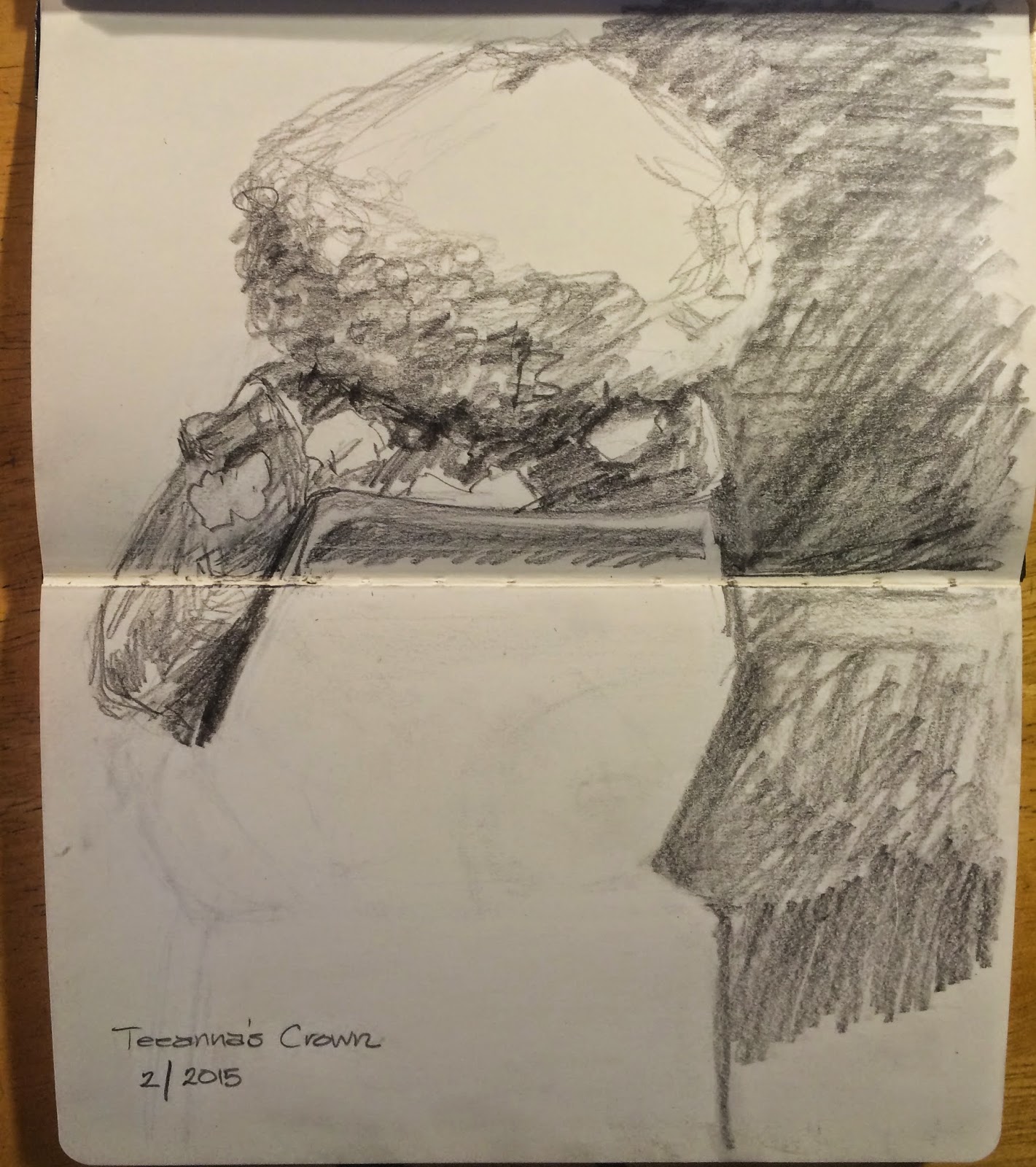 I called this one Teeanna's crown.  Teeanna is a student of mine who has the most beautiful hair and while we were at the show we counted that she averaged 12 compliments from strangers on her hair a day!  I just had to capture it while she was sitting in front of me. 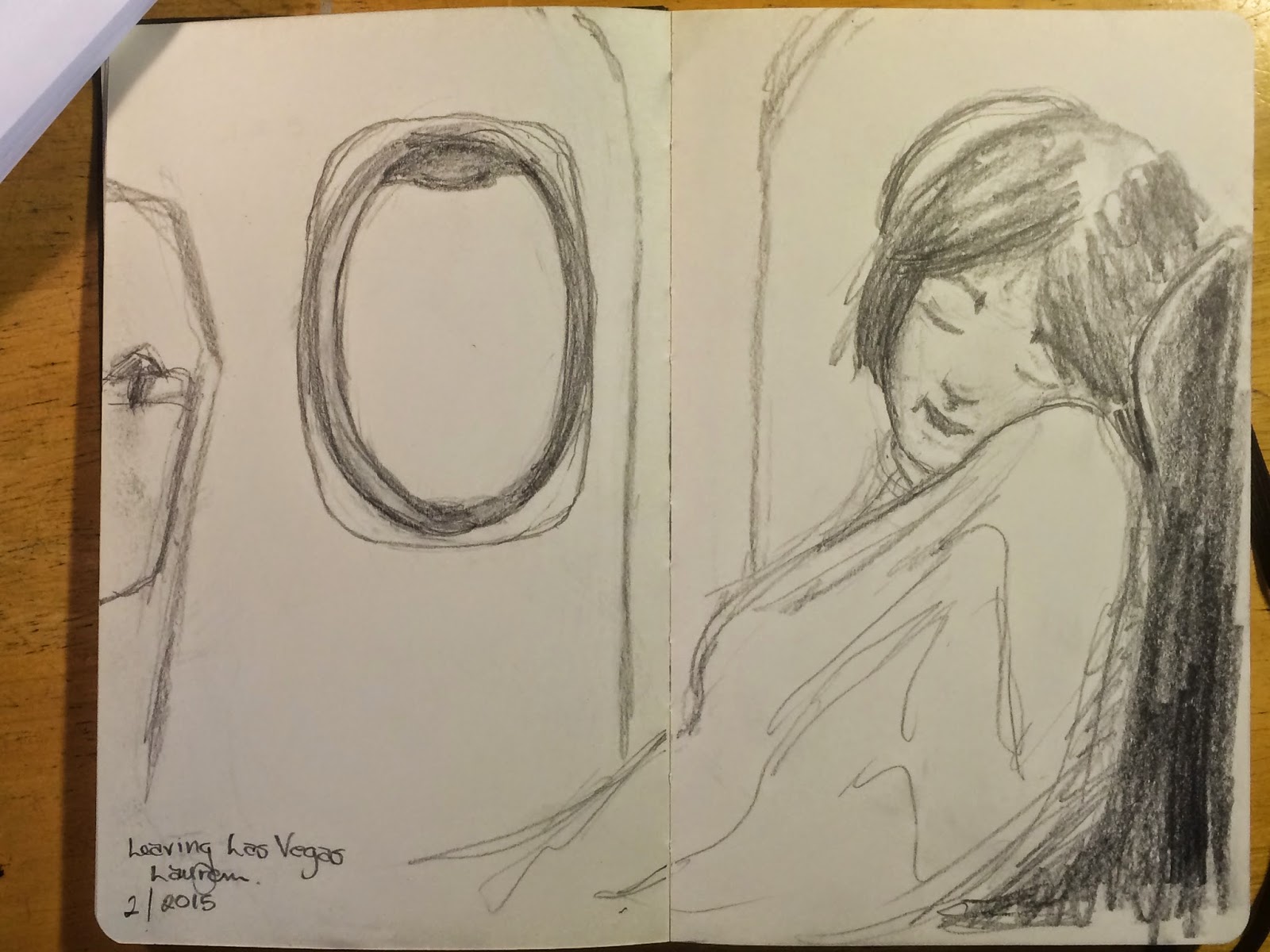 Leaving Las Vegas on the plane, Lauren is fast asleep before we ever left the ground!  We kept those girls running the whole time we were there.  But the slight smile on her face while she was sleeping suggests to me that it was a good time:-) Teeanna and Victoria, ever the conscious students, were working on their "homework" during the plan ride home.  I'm so proud of all the girls!  It was a very successful trip!

Posted by Heather Lynn Harris at 8:07 AM No comments: