Another Letter from Father Christmas 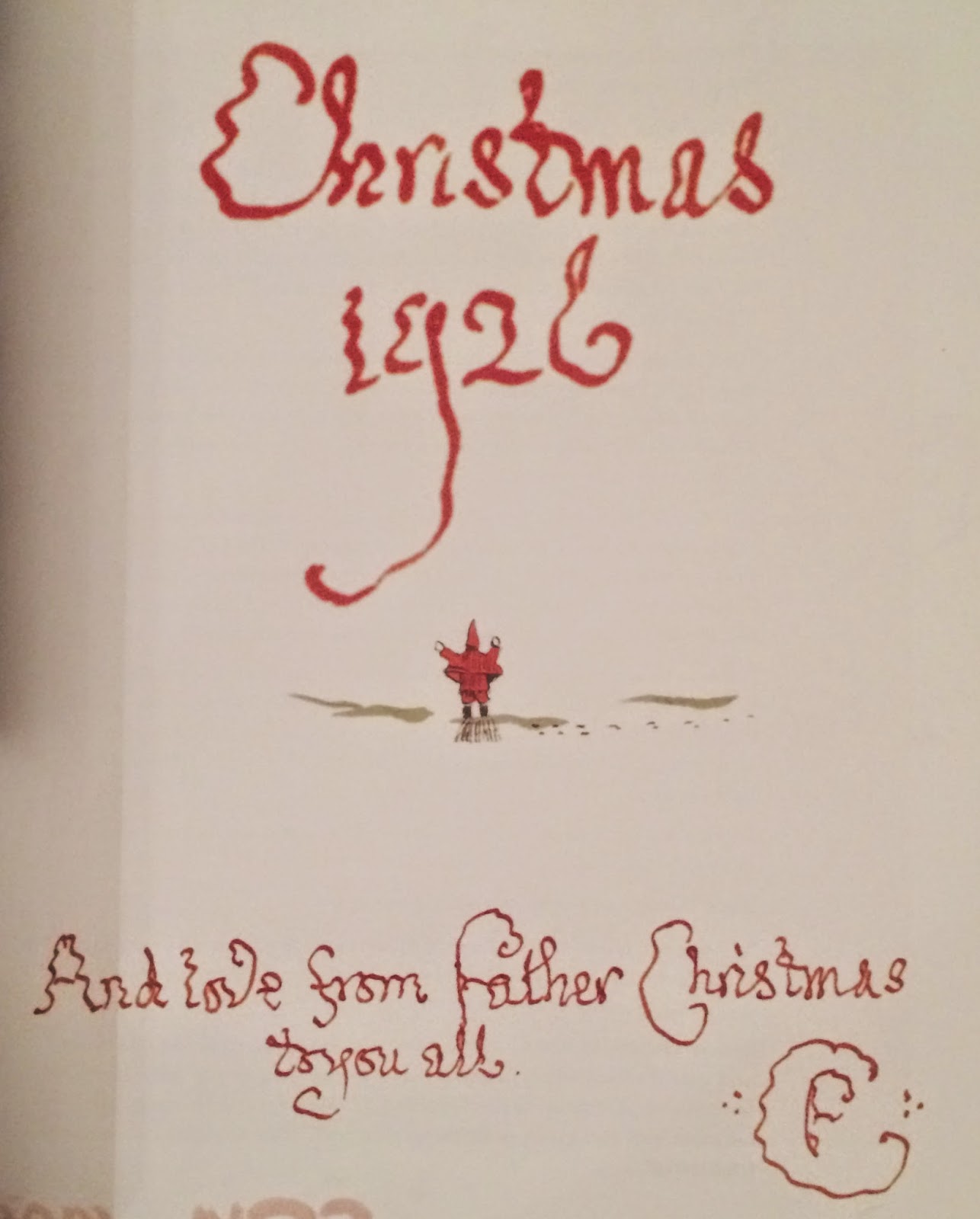 Cliff House, Top of the World, Near the North Pole
Monday December 20th 1926

My dear boys,
I am more shaky than usual this year.  The North Polar Bear's fault!  It was the biggest bang in the world, and the most monstrous firework there ever has been.  It turned the North Pole BLACK and shook all the stars out of place, broke the moon into four - and the Man in it fell into my back garden.  He ate quite a lot of my Christmas chocolates before he said he felt better and climbed back to mend it and get the stars tidy.

Then I found out that the reindeer had broken loose.  They were running all over the country, breaking reins and ropes and tossing presents up in the air.  They were all packed up to start, you see - yes it only happened this morning: it was a sleigh load of chocolate things, which I always send to England early.  I hope yours are not badly damaged.

But isn't the North Polar Bear silly?  And he is't a bit sorry!  Of course he did it - you remember I had to move last year because of him?  The tap for tuning on the Rory Bory Aylis fireworks is still in the cellar of my old house.  The North Polar Bear knew he must never, never touch it.  I only let it off on special days like Christmas.  He says he thought it was cut off since we moved.

Anyway, he was nosing around the ruins this morning soon after breakfast (he hides things to eat there) and turned on all the Northern Lights for two years in one go.  You have never heard or seen anything like it.  I have tried to draw a picture of it; but I am too shaky to do it properly and you can't paint fizzing light can you?

Rude!  I can - and write without shaking.

by going and putting a bit of his own about me chasing the reindeer and him laughing.  He did laugh too.  So did I when I saw him trying to draw reindeer and inking his nice white paws.

Father Christmas had to hurry away and leave me to finish.  He is old and gets worried when funny things happen.  You would have laughed too! I think it is good of me laughing.  It was a lovely firework.  The reindeer will run quick to England this year.  They are still frightened!...
I must go and help pack.  I don't know what Father Christmas would do without me.  He always forgets what a lot of packing I do for him...

The Snow Man is addressing our envelopes this year.  He is Father Christmas's gardner - but we don't get much but snowdrops and frost-ferns to grow here.  He always writes in white, just with his finger...

A merry Christmas to you from North Polar Bear

And love from Father Christmas to you all. 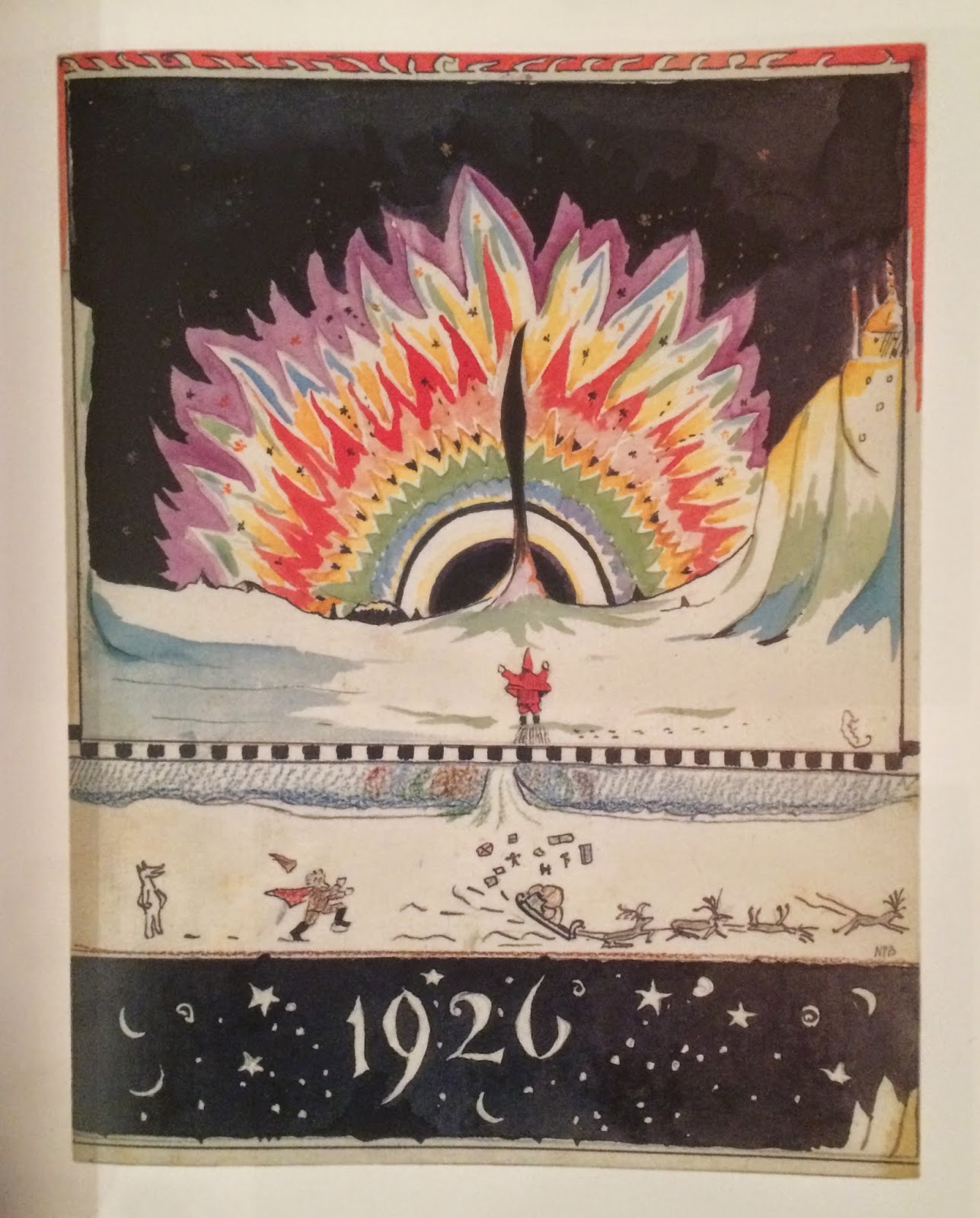 Merry Christmas from me too!
Posted by Heather Lynn Harris at 9:30 AM No comments: 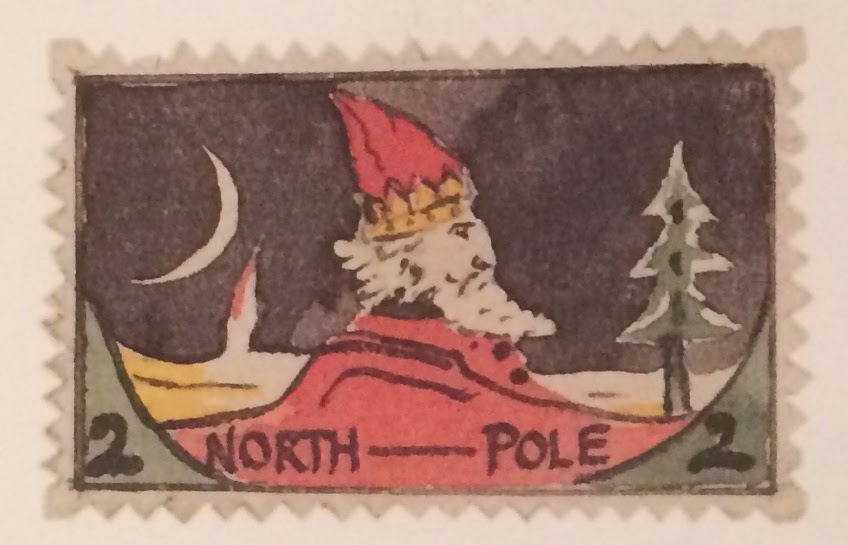 Today I want to share with you a treasure that my sister introduced me to.  It's a book called Letters From Father Christmas and it's written by J.R.R.Tolkien. Yes, the same Tolkien who wrote The Lord of the Rings, The Hobbit, and The Silmarillion.  But what you need to know about this book is that is was never written for the general public.  These are letters that J.R.R. Tolkien wrote to his own children, John, Michael, Christopher and Priscilla, from Father Christmas for them to find on Christmas morning!  They start in 1920 and go through to 1943 and they contain the stories, tales and hilarious antics that happen at the North Pole in preparation for Christmas.  The letters are written by Tolkien in a shaky handwriting and are accompanied by the most endearing illustrations.  They are all done in ink, and I am assuming given the time in history that these were written, it is fountain pen ink.  He has them so beautifully detailed and they compliment his letters perfectly.  He truly was a storyteller, both in writing and in picture. 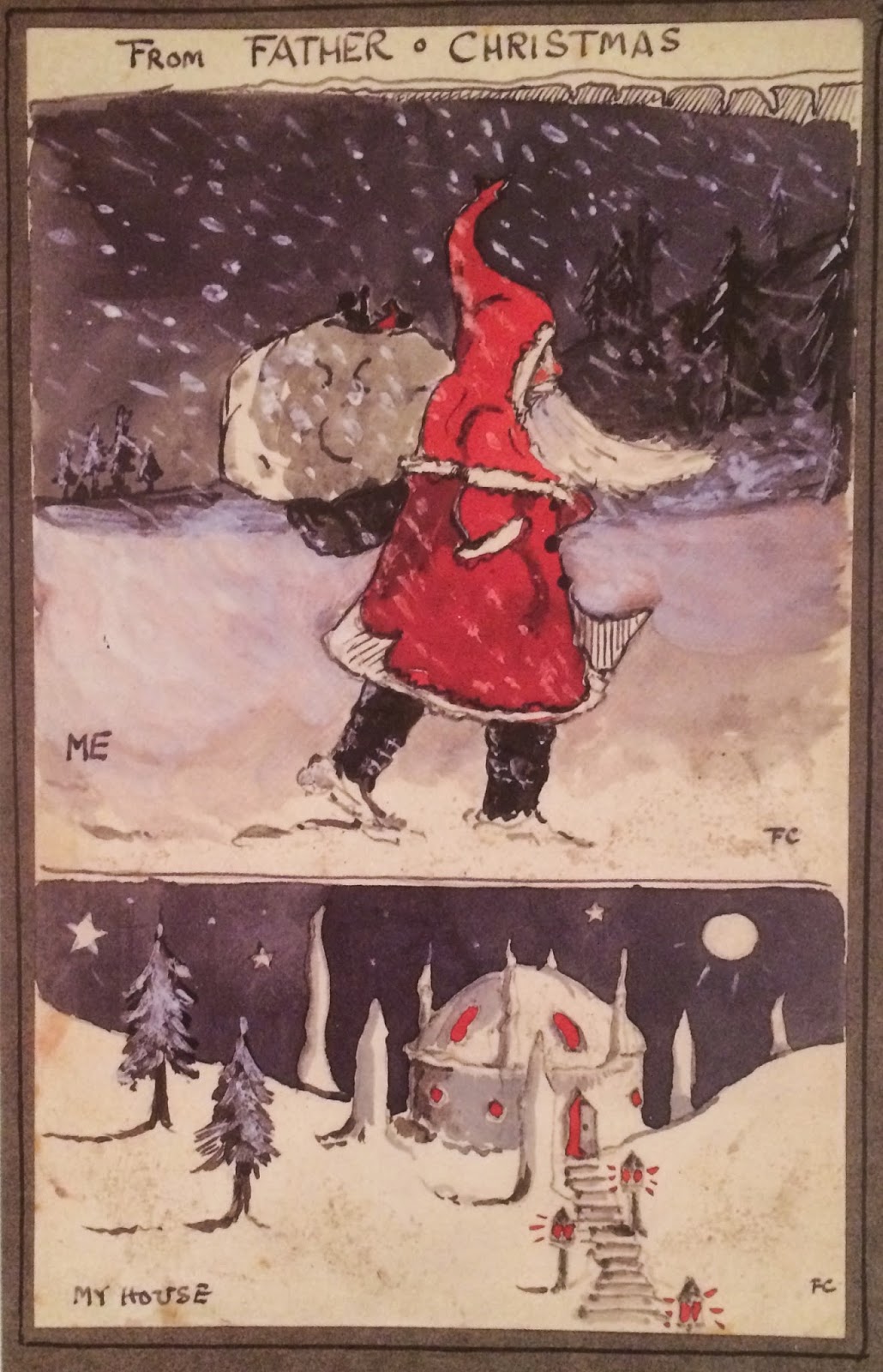 He also hand lettered each envelope and created his own stamps for them.  Here is a sample of some of the stamps. 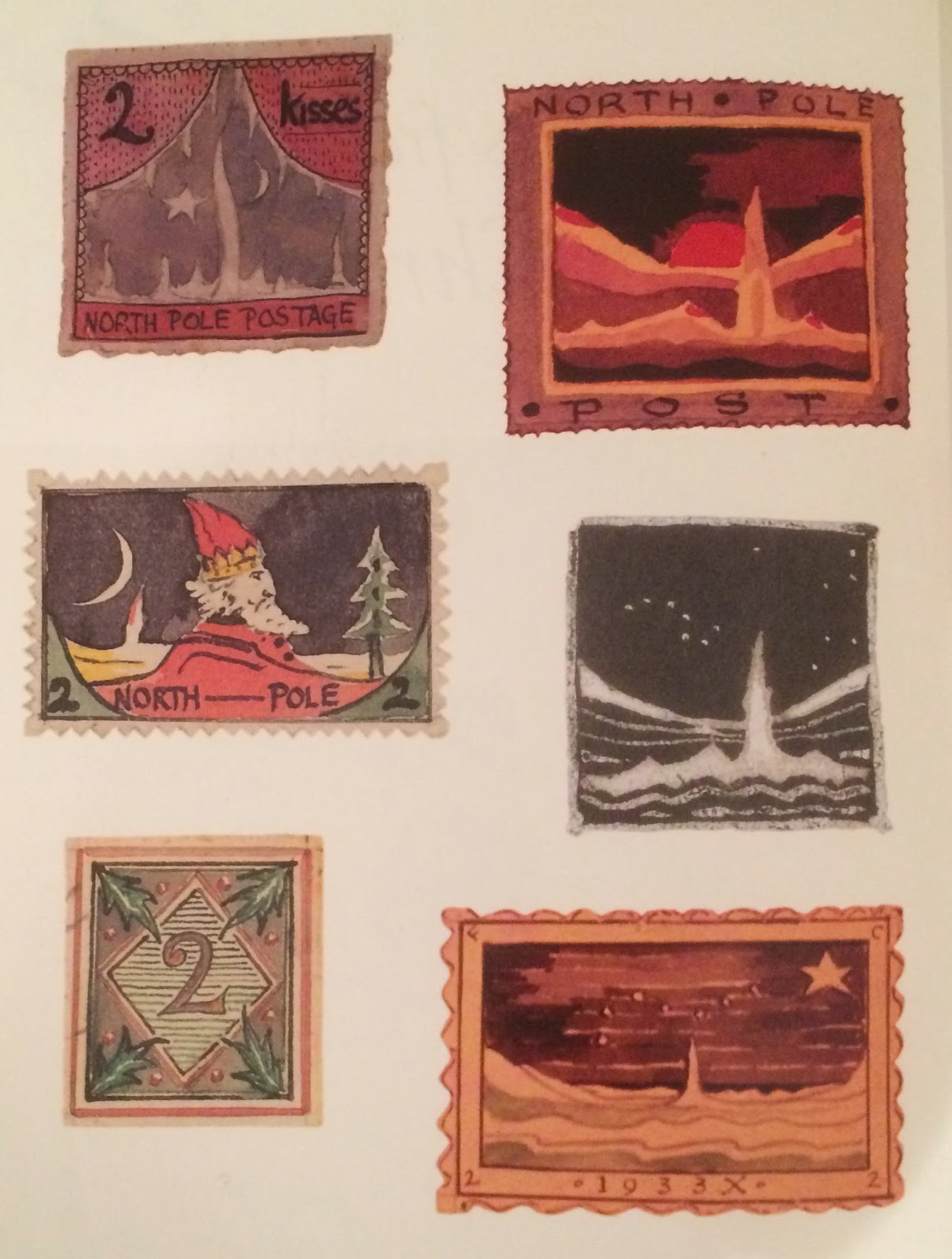 I wanted to share one of the stories with you to give you a taste of how wonderful this book is.  This letter was written to John, Michael, and Christopher in 1925.

Cliff House, Top of the World, Near the North Pole
Christmas 1925

I am dreadfully busy this year - it makes my hand more shaky than ever when I think of it - and not very rich; in fact awful things have been happening and some of the presents got spoilt, and I haven't got the North Polar bear to help me, and I have had to move houses just before Christmas, so you can imagine what a state everything is in, and you will see why I have a new address, and why I can only write one letter between you both.

It all happened like this:  one very windy day last November my hood blew off and went and stuck on top of the North Pole.  I told him not to, but the North Polar Bear climbed up to the thin top to get it down - and he did.  The pole broke in the middle and fell on the roof of my house, and the North Polar Bear fell through the hole it made into the dining room with my hood over his nose, and all the snow fell off the roof into the house and melted and put out all the fires and ran down into the cellars, where I was collecting this year's presents, and the North Polar Bear's leg got broken.

He is well again now, but I was so cross with him that he says he won't try to help me again - I expect his temper is hurt, and will be mended by next Christmas.

I send you a picture of the accident and of my new house on the cliff above the North Pole (with beautiful cellars in the cliffs).  If John can't read my old shaking writing (one thousand nine hundred and twenty-five years old) he must get his father to.  When is Michael going to learn to read, and write his own letters to me?  Lots of love to you both and Christopher, whose name is rather like mine.

PS:
Father Christmas was in a great hurry - told me to put in one of his magic wishing crackers.  As you pull, wish and see if it doesn't come true.  Excuse thick writing I have a fat paw.  I help Father Christmas with his packing: I live with him.  I'm the

The Great Polar Bear slipped in a little note this year as well:)  Here is the picture that was included with the letter and the actual letter: 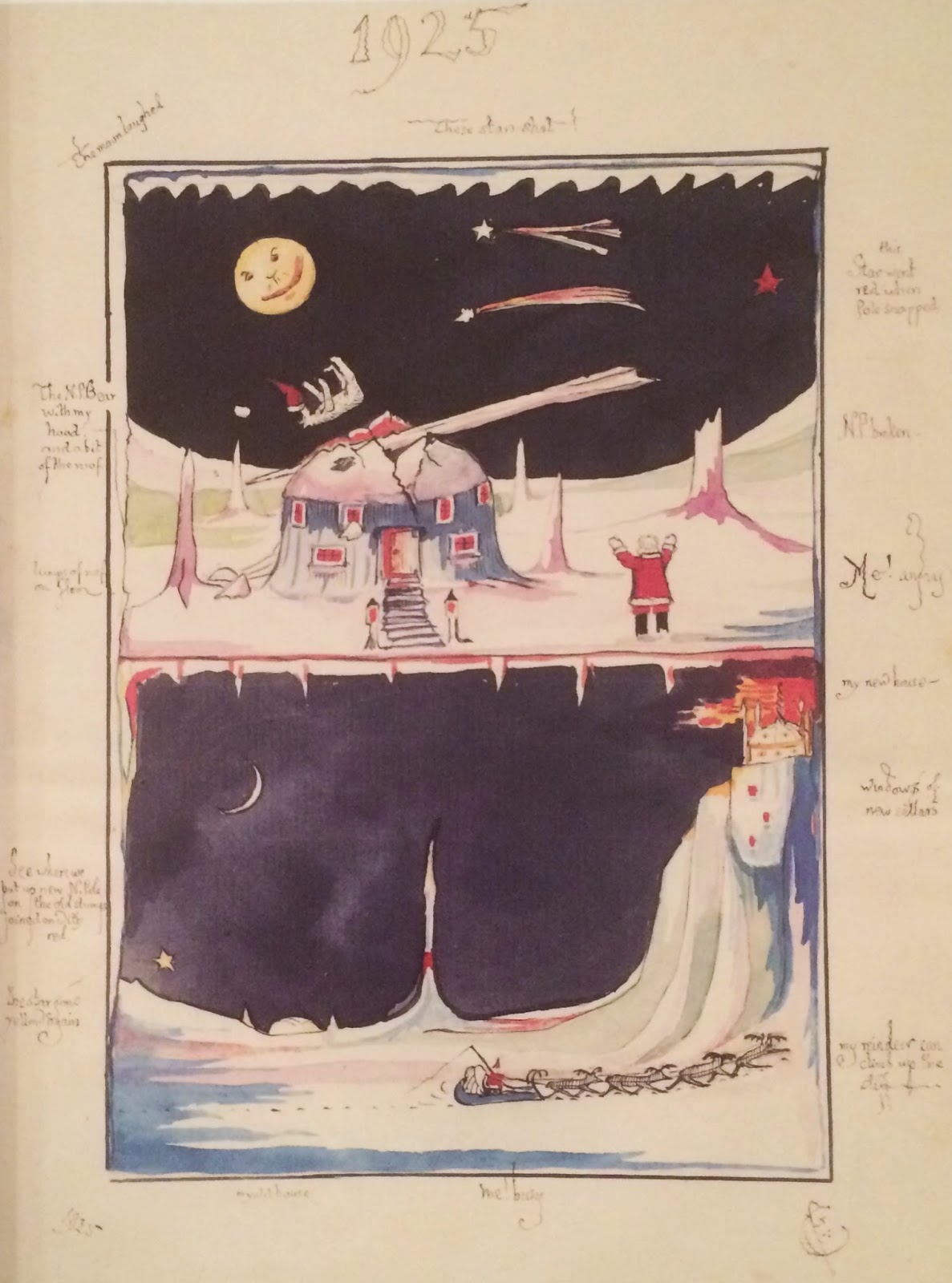 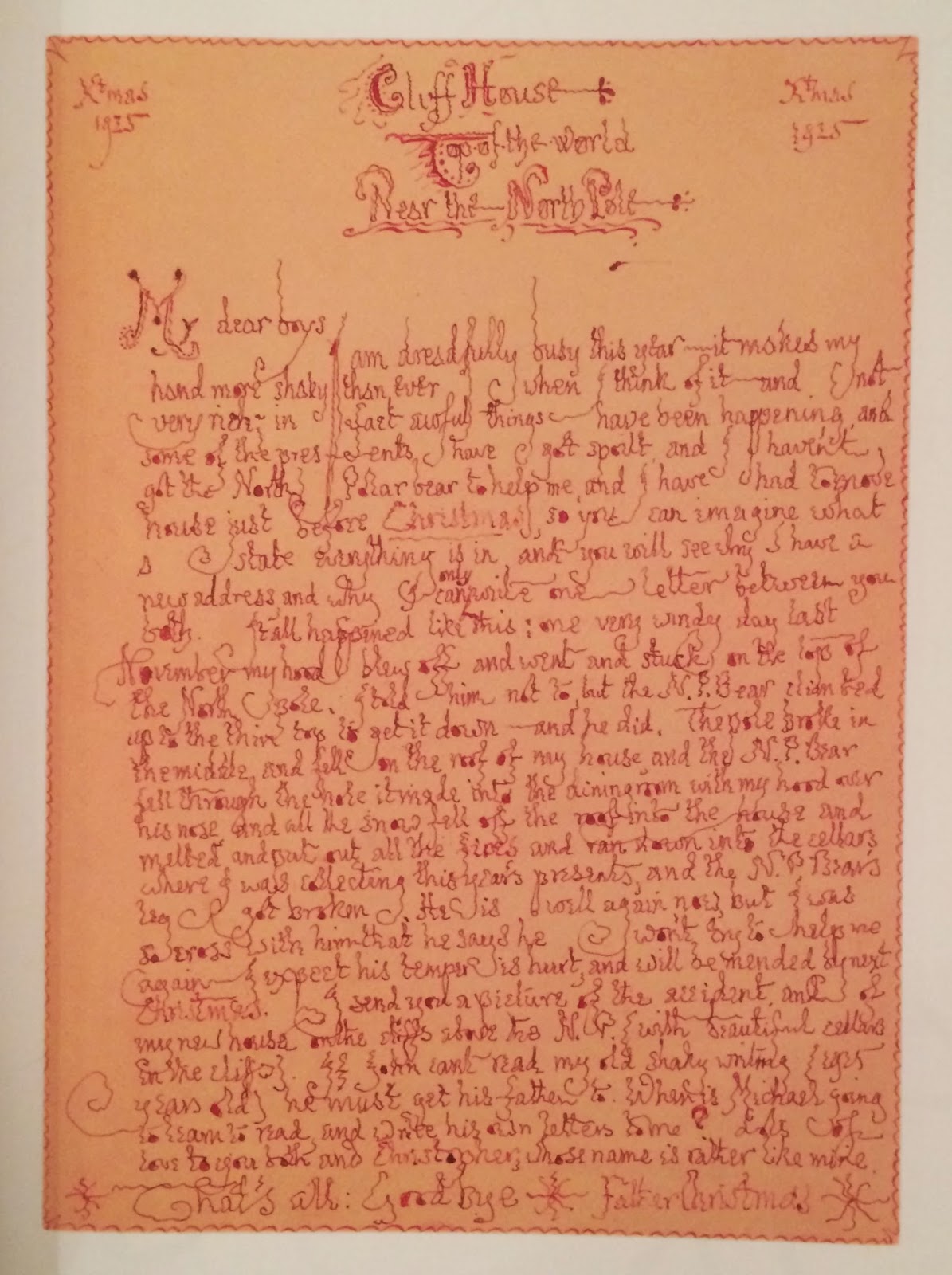 Isn't this wonderful?  That Polar Bear is always making some sort of mischief for Father Christmas, but his heart is in the right place:)  The sad thing about this book is that to the best of my knowledge it is no longer in print.  You need to find a used copy on the internet or in an old bookstore (where the best books are always found anyways, right?).  I was lucky enough to get my copy from my college.  They were reducing their children's book collection and this book was among them!  I immediately asked if I could buy it, so now I have my own copy.  I highly recommend that if you can find a copy - buy it - you will love it!

I hope you enjoyed reading this post.  I'll try to share another story from the book with you tomorrow for Christmas Eve!

Posted by Heather Lynn Harris at 9:34 AM No comments:

I wanted to make the donation before Christmas and now that I have fulfilled all my book orders I was able to make the donation yesterday.  Thanks to all of you and your support we were able to raise $507.60 to donate to FMSC!!!  That means we gave 2,076 meals to starving children around the world!  Thank you for your support of The Swing and FMSC!  If you are interested in getting involved with FMSC you can find our more at their website:  http://www.fmsc.org

Posted by Heather Lynn Harris at 9:30 AM No comments:


What a great weekend I had at the 11th Annual Local Author and Illustrator book signing event held at the Buffalo History Museum.  I met so many great people and made so many wonderful contacts.  If you missed the event here are some photos for you to enjoy! 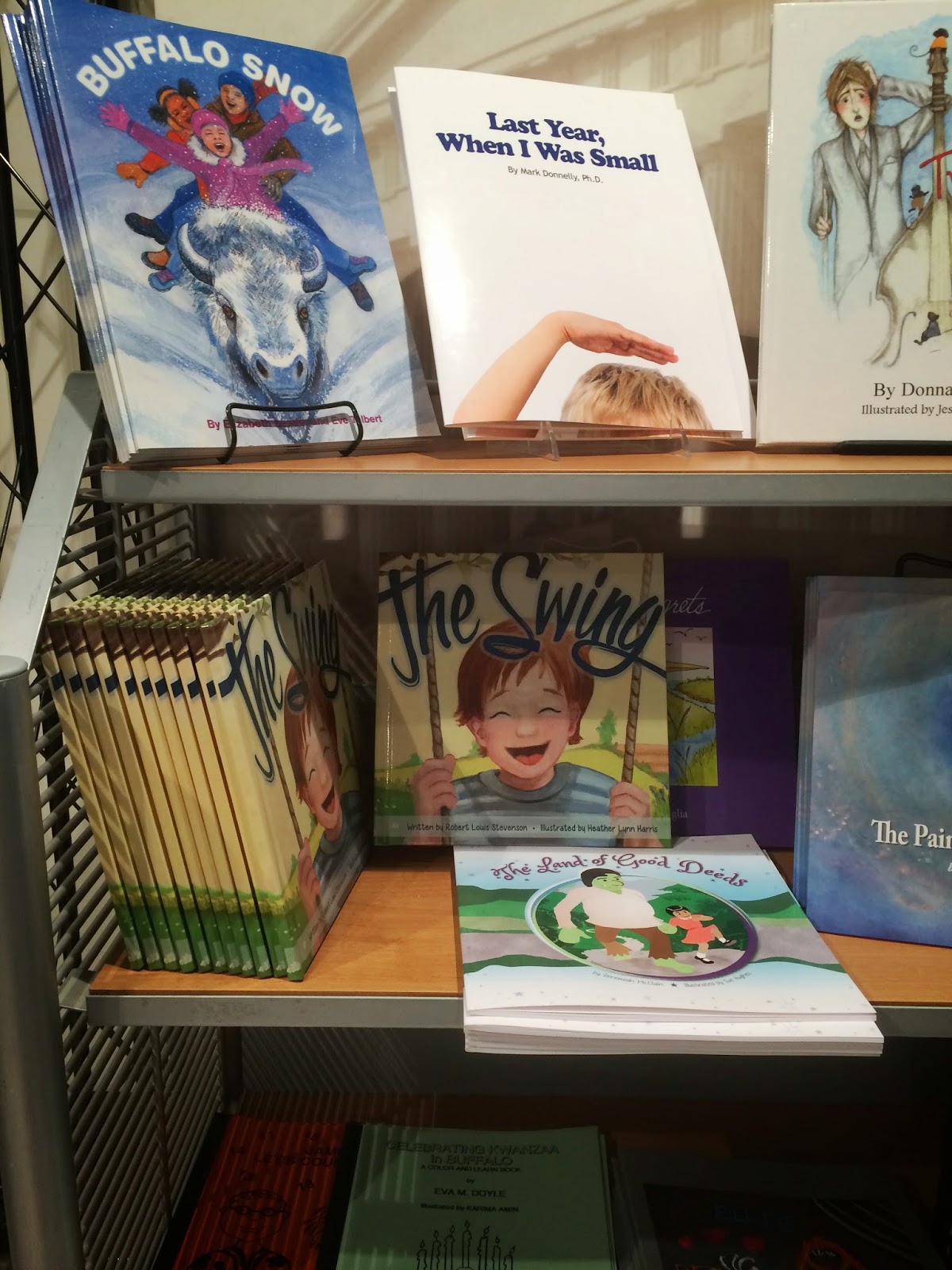 The History Museum Book Store brought in multiple copies of everyone's book so patrons could buy them and have the authors sign them.  First time I have seen my book on a store shelf!  So cool! 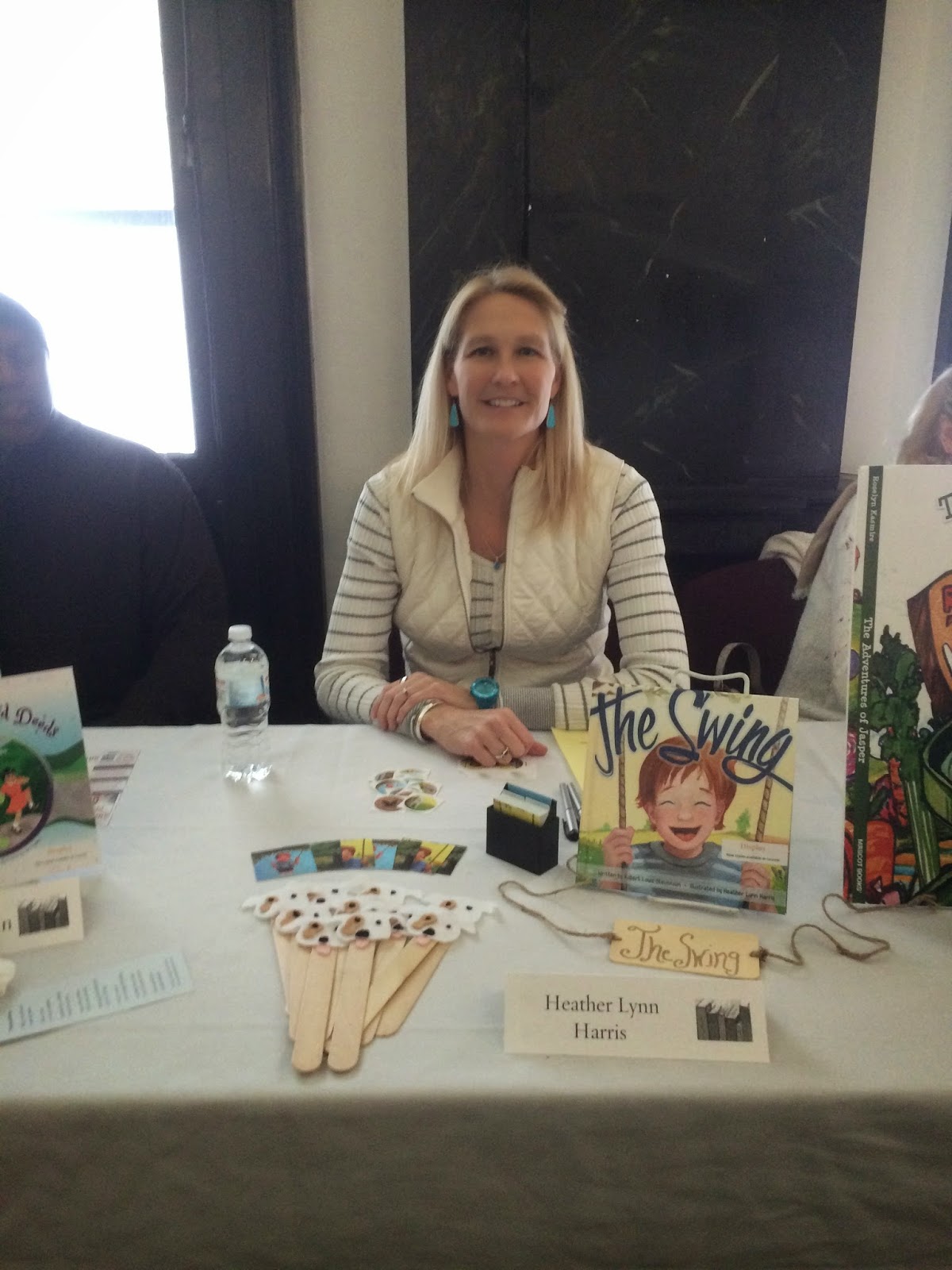 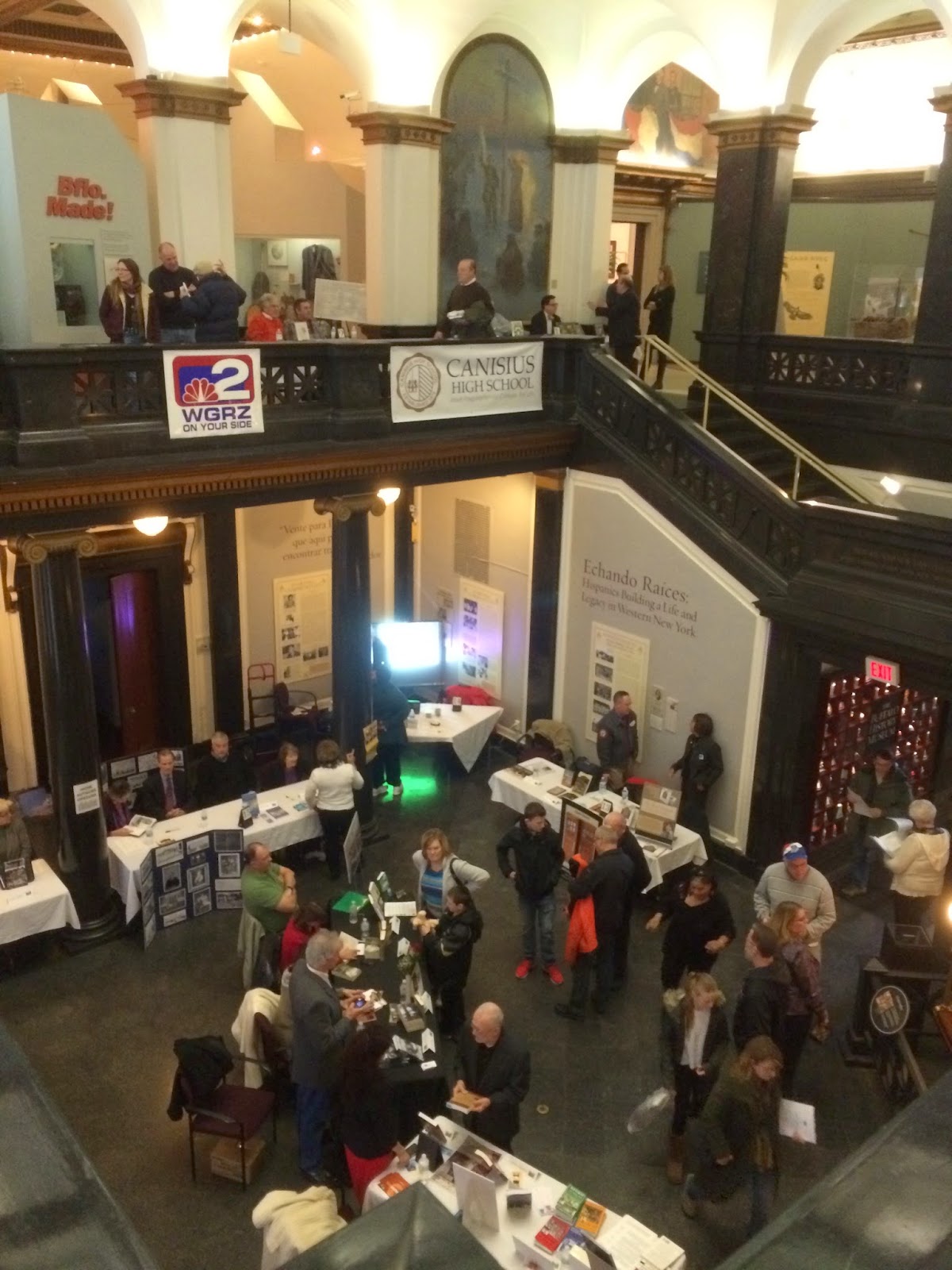 Authors and illustrators were placed on both the first and second floors of this beautiful historic building.  It was standing room only! 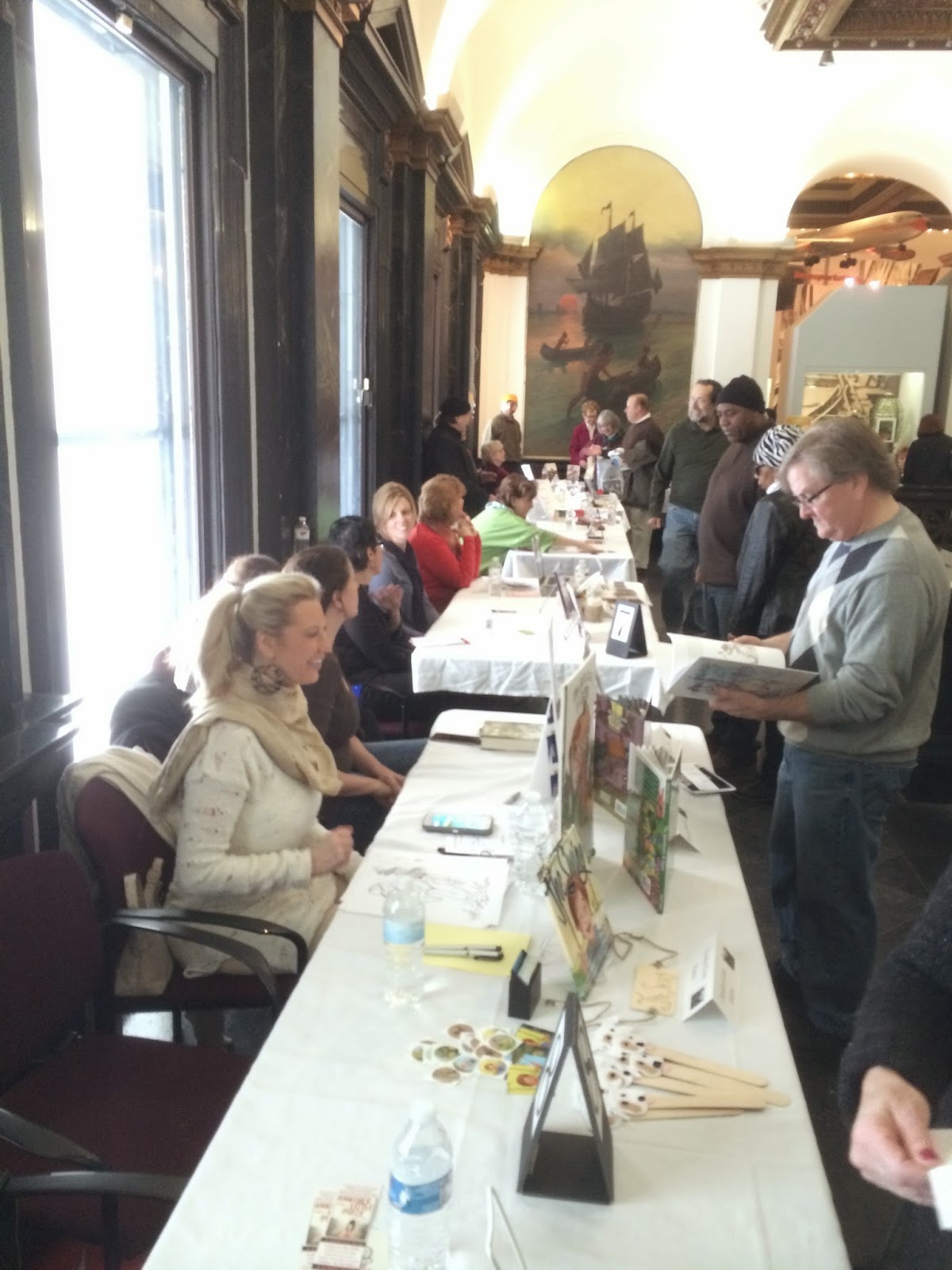 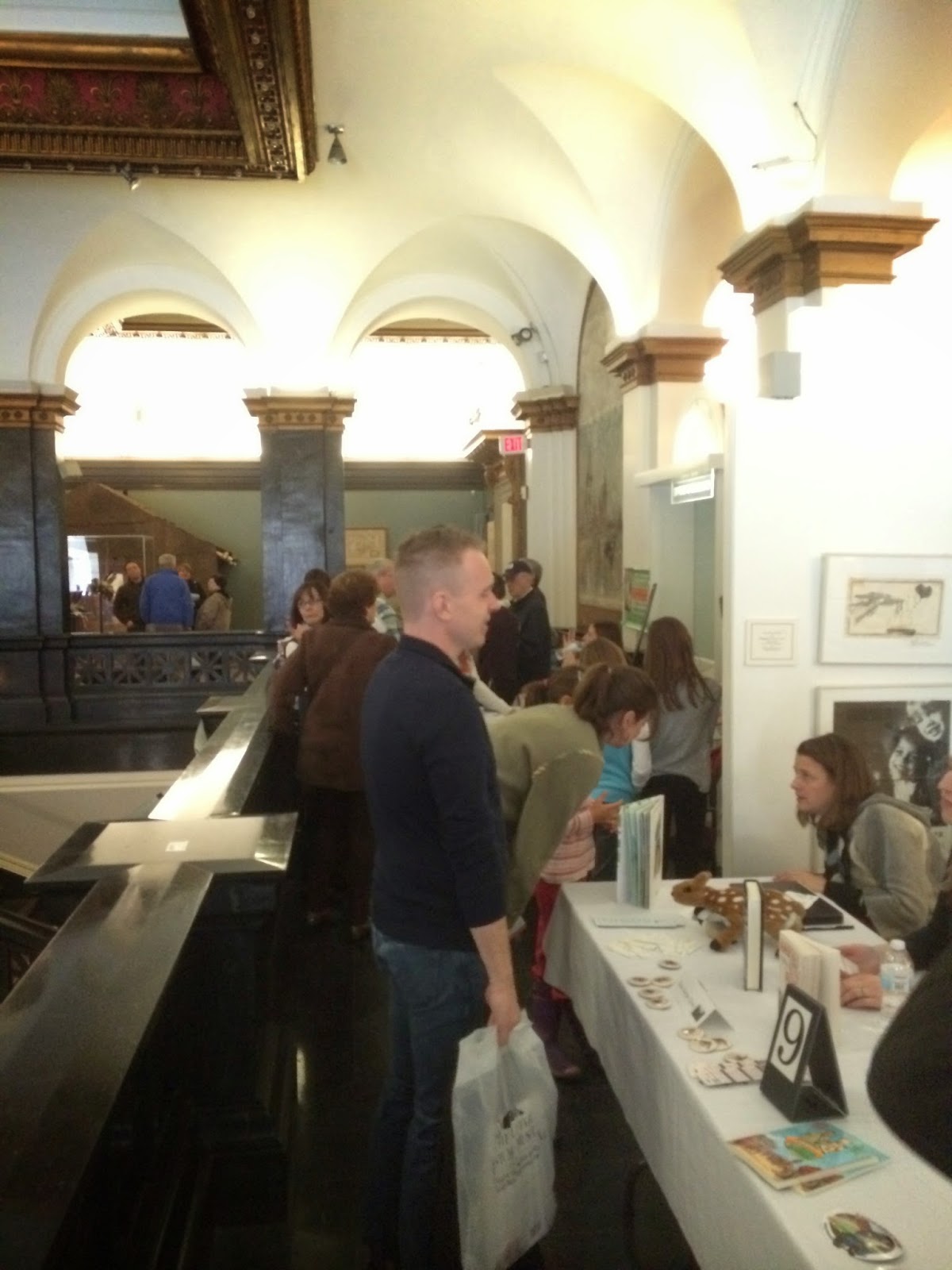 This morning driving into work I heard a segment on NPR about this event and they even interviewed the gentleman who was seated next to me at the event.  It really was a wonderful event with a large and positive impact on our community.  I was so glad to be a part of it!  Definitely doing it again next year:)
Posted by Heather Lynn Harris at 1:40 PM 2 comments: