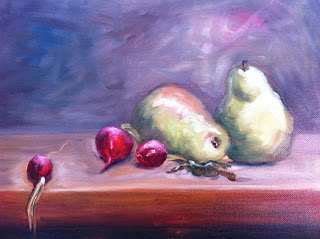 So last weekend I attended a still life workshop with Thomas Kegler.  He is a fabulous artist so even though I don't usually paint still lifes, I decided it was too good to pass the opportunity up.  It was a great day with a demo in the morning, a exquisite lunch at the Roycroft Inn and painting in the afternoon.  I learn the most by watching the demo and observing his handling of the brush.  He also was so kind as to share a few of his favorite paint colors and brushes with me.  So here is the work I created.  I call it "Two pears and some radishes".  Original title eh?  :)
Posted by Heather Lynn Harris at 7:23 PM No comments:

Here is a painting I did after an artist I really enjoy named Hugh O'Neil.  I did this painting thinking of my friend Steven who commented to me on many occasions that a good painting is about the paint!  I agree.  So I tried to apply the paint lusciously...I hope it makes you want to lick it Steven:) 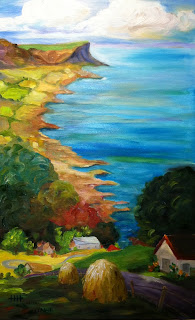 Another drawing lab has you draw portraits with your non-dominant hand.  This exercise is to loosen you up and allow for unconscious drawing of what you see without trying for perfection.  I decided to do my three children.  I discovered a few things that were really interesting....  Now first I have to tell you that I just spent a year studying the portrait and trying to capture likeness.  It's hard to unlearn those things so when I was using my non-dominant hand of course I tried to "obey the rules" I had learned.  But I found that I couldn't keep to those rules because my left hand is just not that controllable:)

What I did find though was that this was a lot of fun!  I used a brush marker which allowed me for some variation in line (which my left hand doesn't achieve as well as my right).  I also looked at the person 70% of the time so they are kind of blind contour drawings as well.

I also discovered that to people who know my kids they could identify them based on their eyes!  Eyes is where we look the most when we look at people, so get the eyes right and your half way there to likeness.

The last thing I discovered is that this is a great way to develop characters.  Simply because you capture the essence of the person and not all the details.  I will definitely be using it in the future. 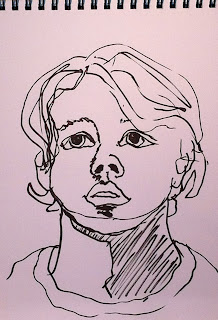 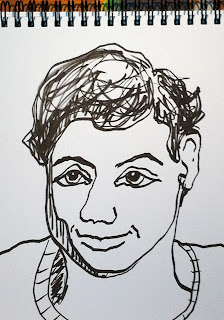 Posted by Heather Lynn Harris at 1:43 PM No comments: 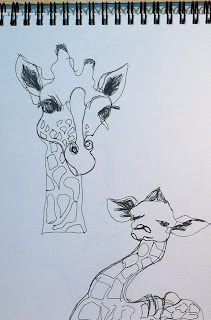 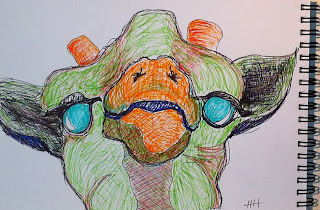 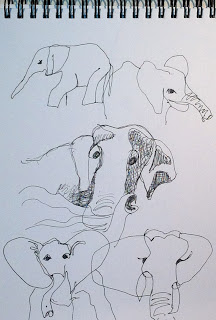 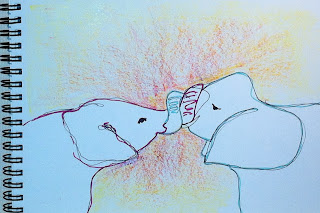 The next set of exercises in the drawing lab was blind contour drawings.  This is when you draw something you are looking at without looking at your paper.  It makes for some crazy and interesting drawings but more importantly it helps to connect the eyes to your hand.  I did some giraffes and elephants and those chose one of each to further define with looking.
Posted by Heather Lynn Harris at 7:00 PM No comments: 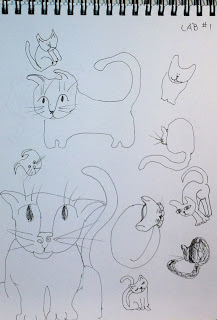 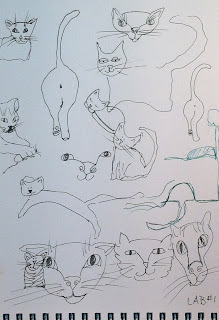 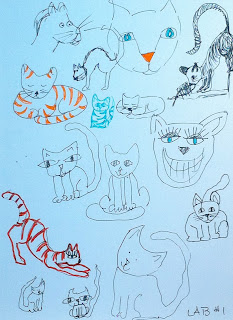 So I got this book for my son for Christmas called the "Drawing Lab" by Carla Sonheim....and I have used it more than he has.  In fact he hasn't used it at all because I have it all the time:)  It's a really fun book and helps you to connect the eyes to the hand by emphasizing spontaneous drawing and not focused drawing.  Since all the work I have been doing at the Academy has been to hone my skills at observation and accurate drawing I thought it would be fun to be spontaneous!  Here are a few examples of the first lab which is drawing cats from the imagination while on a bed (soft surface creates more gestural lines).
Posted by Heather Lynn Harris at 5:01 PM No comments:

Got an "A" in my art history class:)
Posted by Heather Lynn Harris at 4:46 PM No comments: