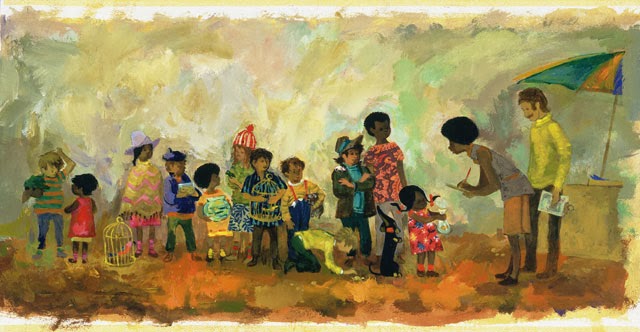 A while ago I posted about my top 10 favorite illustrators.  Well, I thought I would expand on that for you and feature each illustrator in a post of their own.  To start I chose Ezra Jack Keats because I would have to say that I think he is my favorite:)

It is not surprising that I like Ezra Jack Keats work, many people do.  And of course he was recognized multiple times over during his life.  But his story is so inspiring to me.  He was born around the time that my grandfather was (the one I just lost and posted about a few weeks ago).  He grew up in New York City and was quite poor and his family was hard hit when the Great Depression arrived.  But he persevered in his art despite the fact that his father was concerned about his being able to make a living as an artist.  Ezra's father Benjamin worked as a waiter in a restaurant and knew how hard it was to provide, and despite his desire to discourage Ezra from pursuing art, Benjamin brought home tubes of paint, pretending that he had traded them with penniless artists for food!  Ezra remembered his father saying, "If you don't think artists starve, well, let me tell you…one man came in and swapped me a tube of paint for a bowl of soup."  I love it that his dad was concerned for his welfare, but still wanted to encourage him because he was proud of his son's talent.

Ezra served in the army during World War II, like my grandfather, and then came home to pursue art.  He was determined to study painting in Europe and found a way to spend a season in Paris in 1949.  He returned home to New York and pursued work in commercial art.  Children's book illustration sort of found him and he excelled in it.  It was never his intent to do children's book illustration, but I'm so glad that he did!  He illustrated during a time in our country when there was still a lot of discrimination.  He himself was the victim of discrimination because of his Jewish heritage and he empathized with people who were struggling with it.  Consequently, he was one of the first illustrators to make an African American child the protagonist in a story.

What I appreciate most is that Ezra painted and wrote stories about what he knew, people from his community.  People we can all relate to.  Many of his stories portray family live, and the simple pleasures and more complex problems that children encounter every day.  He drew on his own childhood experiences for his books, like having to run from bullies or being teased by friends.  But these are also the experiences that many children can relate to and that what makes his work so powerful.  He also develops wonderful, memorable characters that we fall in love with.

and of course Peter and his dog Willy! 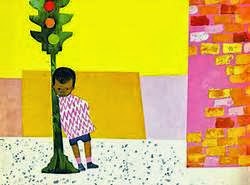 I also like Ezra's approach to his artwork.  He uses lots of brush strokes and strong shapes.   The simplicity of the shapes are so eloquent and lend such charm to his art.   And I like how he uses elements of collage as well to create his patterns.  I just love studying Ezra's work! 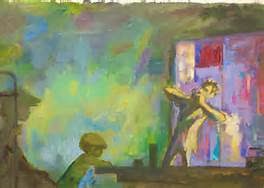 I hope you enjoy his art as much as I do!

Posted by Heather Lynn Harris at 9:30 AM No comments: 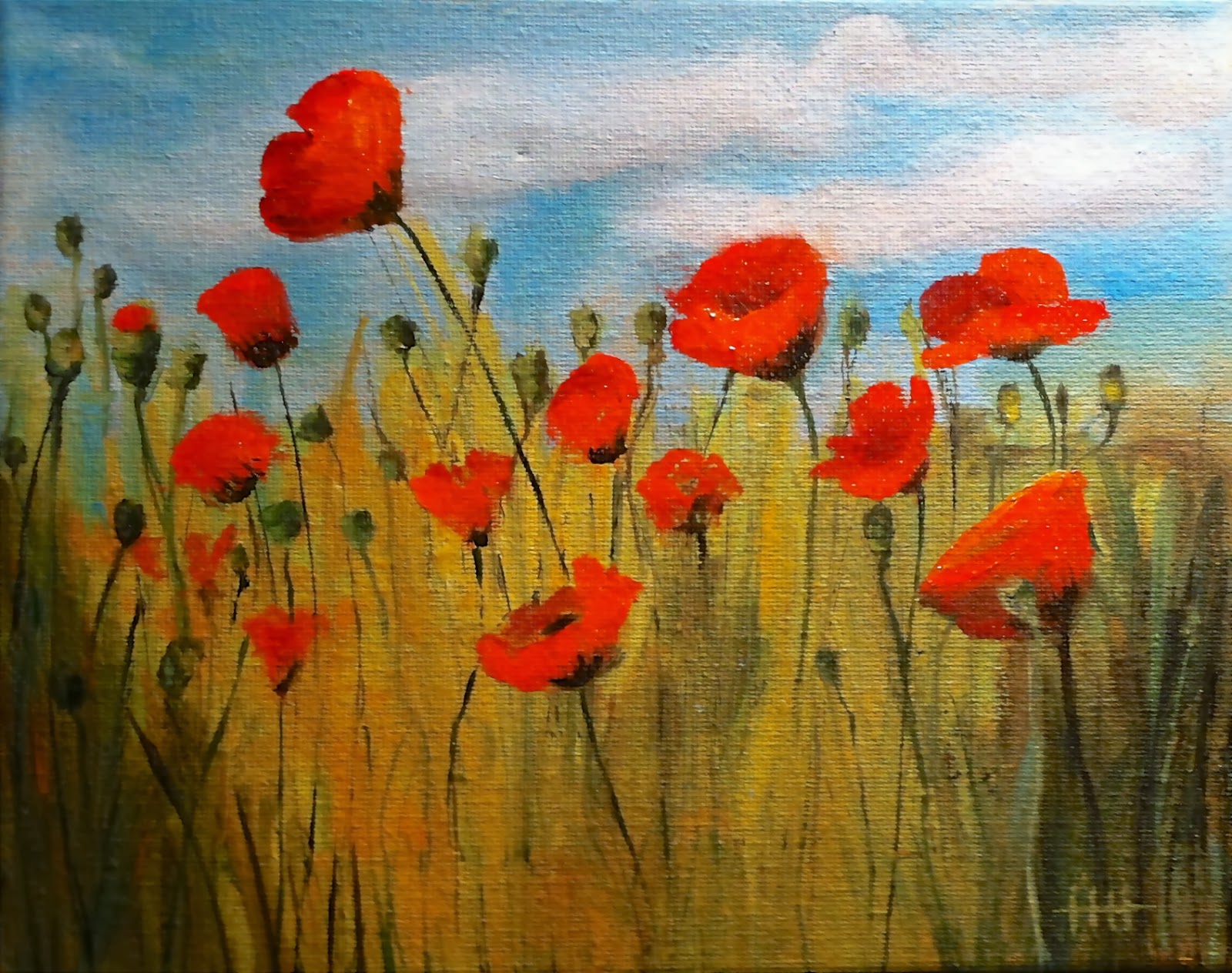 Winter in Buffalo can be described with one word….grey!  We have had no sun and lots of snow for way too long now.  So when I got a chance to paint this weekend I just had to paint color!  Lots of it!  It was so refreshing to see the blues and reds and oranges and greens on my canvas.  My pallet was just as beautiful as it had the mixtures of all these colors.  I especially loved the permanent green light mixed with a little cadmium yellow light…such a beautiful spring color!  So for all you who also know winter to be about grey I thought I'd post my painting for you to enjoy.  This one is going front and center in the kitchen of my house so I can see it every day till the real thing arrives:)  Enjoy and let me know what you think.
Posted by Heather Lynn Harris at 9:12 AM No comments: 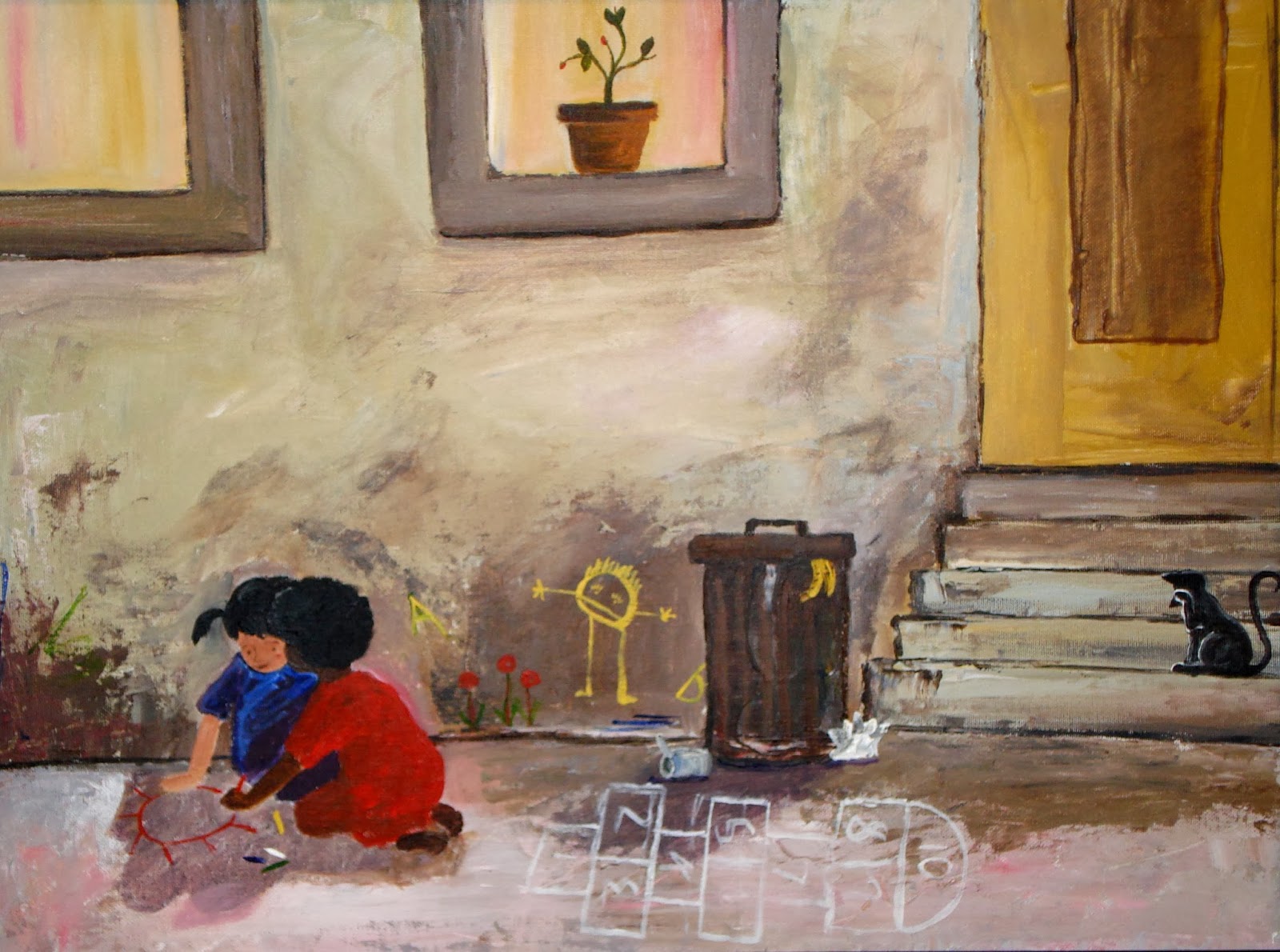 Here is my post for illustration Friday's topic of "time".  This is called Hopscotch Time!  This painting was done in acrylic on board.  Enjoy!
Posted by Heather Lynn Harris at 9:00 AM No comments: 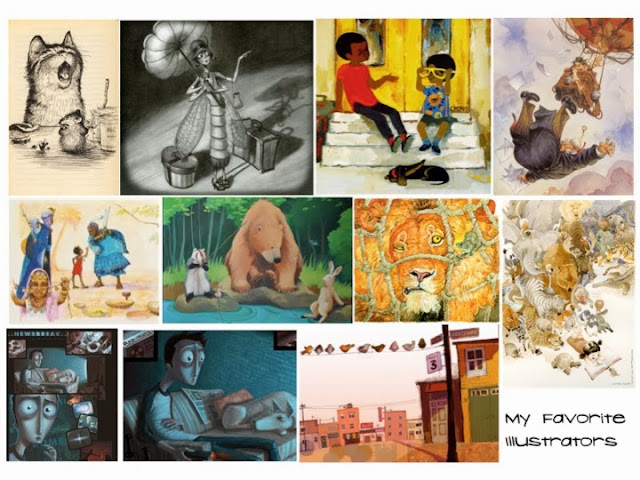 Picture books are my favorite form of art and there are some picture book illustrators whose work I think is outstanding.  I thought I'd share with you my top 10 favorite illustrators..and I should qualify that they are illustrators but also story tellers.  Some are award winning and some are not.  Some have been illustrating a long time and some have just recently made a name for themselves.  Some are alive and some are dead.  Some work with in animation and concept art, some in picture book art, and some do whatever illustration job comes along.  But all inspire and motivate me and I find myself time and again returning to their work to see how they handle a situation or set up a scene.


I have included a sample of their work in the collage above. Starting at the top left, I'll mention the artist and what I love about their work.  In subsequent posts, I'll feature each artist further.

Garth Williams is at the top left and I love his art because it's always in pen and ink.  His line work is so good and his characters have so much depth using only black and white.  Another artist who is excellent with black and white is Tony DeTerlizzi who is next.  His value pattern and character development is what draws me to his work.  Ezra Jack Keates work is simplistic, childlike and yet so profoundly well done.  His was one of the first illustrators to use African American children as protagonists…but he didn't do that to make a statement, he did that because he painted what he knew.  He grew up in New York City as a Jewish boy who lived in an ethnically diverse neighborhood and his art naturally reflected his surroundings.  Rounding out the top row is Peter De seve, who is best know as a concept artist and who developed the characters for Ice Age, among many other feature animated films.  He also has done multiple New Yorker covers and in my opinion captures New York like no one else can.  I love his characters, his wit in his storytelling and his application of watercolor.

Starting the second row is Trina Schart Hyman whose influences are similar to Ezra Jack Keates in that she grew up in New York City and her artwork reflects all ethnicities of people.  I love her figure work - she is so good at capturing the human form.  Jane Chapman is the creator of the beloved bear character that I love so much.  What I admire about Jane's work is her color pallet which is so young and playful without being too primary, and her animal characters are so memorable.  Jerry Pickney is next and if you have seen his work, you too would put him in your top 10 list.  He is one of last century's most successful African American illustrators and his career evolved during a time of great change for both illustration and black people in this country.  He was often a voice and a vessel for dealing with issues about race.  His watercolors are outstanding and he really studies his subjects well and the infuses personality into them in a way that readers can really relate to.  Leuyen Pham is an artist who I discovered recently.  What I love about her work is her ability to place so many story telling elements in her compositions and to have them all feel harmonious.  Her characters are adorable and her illustrations have a sweetness to them.

Starting the third row of images is Michael Knapp an illustrator that I discovered through the "Out of Picture" book that was published by Blue Sky Studios.  Blue Sky Studios is  a computer animation studio dedicated to creating high end character animation and visual effects for the commercial and feature film industries.  The artists there are amazing and they put together a book of all their ideas that were cropped "out of the picture".  Really cool!  I was drawn to Michael Knapp's work because of his ability to tell a story without any words.  He also has wonderfully dynamic compositions.  And the last image I have above is from Sara Palacios.  I discovered Sara on Illustration Friday, a blog site that features illustrators work.  I fell in love with her work and have been following her for about 5 months.  Her picture book work reminds me of Ezra Jack Keates, but with an updated feel, and I love her character development.  She has also been so kind as to talk to me on e-mail and through Facebook, so I feel honored that she would share her hard earned knowledge with me.  She is also a graduate of The Academy of Art University so we have that common educational element.

Posted by Heather Lynn Harris at 1:17 PM No comments: